Successful Qualifying In Silverstone For Lorenzo And Spies 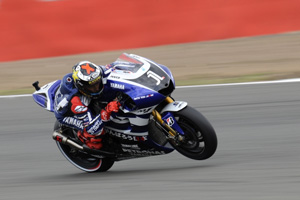 Today's qualifying session for tomorrow's Silverstone GP came to a successful conclusion for both Jorge Lorenzo and Ben Spies this afternoon. The second day of the British round of the World Championship was graced with sunshine, allowing the riders to finalise a good dry set up. The Yamaha Factory Racing riders were quick from the start in the morning's final free practice session, wrapping it up with Spies in third and Lorenzo in fourth. â€¨

Qualifying followed in the afternoon, both riders again enjoying a dry track as they evaluated tyres for tomorrow's race should it be dry. At one point Lorenzo and Spies were threatening to deliver a double Yamaha front row; finally settling at the end of the session for a front row third and second row fourth respectively in a mirror of their Barcelona start positions.

"I am very happy because tomorrow we will start from the first row and today we got a lot closer to the Hondas. I rode at a very high level today and I'm ready and focused for the race. I will do my best to make a good start tomorrow and fight for the front. At this moment our weapon is consistency. You try many things some days and some days you find a solution like today. I don't know if it is enough to fight for victory but we will give our best. I'm very proud of my crew, they really worked hard to deliver a great package for qualifying!"

"It was a good day today, we made some improvements to the bike and then tried some different tyres to evaluate and see if they are going to be race tyres for tomorrow if it's dry. Qualifying went well, when we tried to nail our fast lap we didn't quite get it all in there, I left out a couple of tenths but they wouldn't have moved me further up anyway, just a bit closer to Jorge. I gave it my maximum and we're starting in a good position so we need to get a good start and of course see what the weather is going to do!"

"I'm pretty happy with the qualifying session today, the bike improved a lot compared to this morning and yesterday. We found the right way to progress and Jorge improved his riding quite a bit as well. The team worked hard between the two sessions and made a step on the bike so for dry conditions we are ready to race. We are 0.2 behind pole which is the closest we have been all year apart from Estoril. This is especially good considering the length of the track."

"Overall we should be satisfied with the second day. We have our riders on the first and second row and we led part of the practice. We've got a good pace and I think we did a good job today, the team worked really hard. We're confident and I think we can get good results. Tomorrow I think it's going to rain but we saw yesterday that in the wet conditions we can be quick so we'll see what happens."

The Monster Yamaha Tech 3 Team suffered another cruel injury blow today after it was confirmed Cal Crutchlow will miss his all-important home MotoGP round at Silverstone with a broken left collarbone. â€¨

The home crowd favourite was just starting his third lap of this afternoon's qualifying session when he lost control of his Monster Yamaha Tech 3 Team YZR-M1 machine on the entry to the second corner. â€¨

He landed heavily on his left shoulder and was immediately assessed by trackside medical staff before he was transferred to the Silverstone Medical Centre. He was diagnosed with a broken left collarbone and concussion. The crash will unfortunately prevent the 25-year-old from starting tomorrow's 20-lap British Grand Prix and he will now commence a period of rest and recuperation to regain fitness ahead of the next round of the 2011 MotoGP World Championship in Assen, Holland. â€¨

Crutchlow's injury comes just eight days after team-mate Colin Edwards broke his right collarbone in a practice crash for the Catalunya race in Spain. The American was passed fit to ride in Silverstone and he produced a heroic performance this afternoon to secure a brilliant eighth position on the grid. â€¨

Brave Edwards shrugged off the persistent pain from a rib injury he also suffered in the Catalunya crash to set a best time of 2.04.508 to finish ahead of several riders in much better physical shape than the popular 37-year-old. â€¨

He modified the settings of his YZR-M1 machine to help him get more comfortable in the hard braking zone and is confident he can fight for a top ten finish tomorrow.

"My shoulder feels pretty much perfect but my ribs are killing me and that's the biggest issue at the moment. I feel worse physically than I did yesterday but when I crashed at Catalunya I pulled some of the muscle away from my ribs and I'm finding it hard to do anything. If I breathe, cough, sneeze or do anything it hurts. So on the bike I just don't have the strength I need to flick the bike in the fast changes of direction. I've got to take my time and be nice and smooth, but to get on the third row is a great result considering this time last week I was lying in a hospital in Barcelona with my right collarbone smashed to pieces. I'm feeling confident for the race but I know it is going to be a big effort. But I'll grit my teeth and do my best as always and show there's plenty of fight in this old dog. I was determined to ride this weekend for the Team. My guys at Monster Yamaha Tech 3 are awesome and they've been an unbelievable support to me in the past few years. So I want to race and get a good result for them more than anything. I'm gutted too for Cal. I know what he's going through unfortunately and I'm really sorry that he's going to miss his home race. I wish him a speedy recovery and hope to see him back giving me a hard time on track in Assen."

"Cal's injury is a very big disappointment and I feel really sorry for him because he was desperate to do well in his home race here at Silverstone. He's been fast all weekend, so we had high hopes that he could get a good place on the grid and be challenging for the top six in the race. But track conditions were quite cold and it was obvious from looking at the TV pictures that the tyre wasn't up to temperature. He is in pain right now but I think he is more upset than anything else because he wanted to put on a good show for the British fans. A lot of people have come to support him and he didn't want to let anybody down. Our luck seems to have completely deserted us at the moment when you think it was only eight days ago that Colin broke his right collarbone. I suppose the only small consolation for Cal is that Colin was back on the bike less than a week later, so we are optimistic that Cal will be back for the next race at Assen. Colin has produced a super human effort to qualify on the third row and his courage and determination has been an inspiration to everybody in the whole Team. At one stage it looked like he might even finish in the top six, which would have been a great reward for him and his Team."