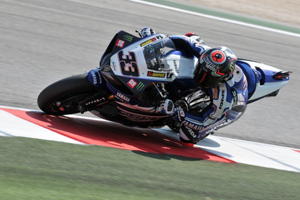 Beautiful sunshine and warm temperatures provided ideal track conditions for Yamaha World Superbike riders Marco Melandri and Eugene Laverty to complete a successful first qualifying session in Misano world circuit. Both World Superbike Rookies took to the track in this morning's free practice on their YZF-R1s for the first time and got straight down to business testing various set ups on their machines ahead of the afternoon's first qualifying session. Unlike most other competing riders Melandri and Laverty, did not test in Misano last month, but despite this disadvantage they completed first qualifying practice in third and sixth position respectively.


Melandri didn't hesitate to make most of his familiarity with his local track and regain confidence, stilted following the disappointing results in Miller just less than two weeks ago. The Romagnolo continued to make progress throughout the free practice and first qualifying session as he searched for the optimum setting for the Misano circuit, putting in his fastest lap towards the end of the red flagged session, to complete in the third place, just four tenths of a second off Checa in the lead.
Team-mate Laverty was also on top form making constant progress throughout the 18 laps completed and ended the session in sixth place, less than two tenths off his Italian team-mate.

"This afternoon's session went quite well. We tried various different set up options one after another and gradually improved the overall performance. We also tried a better tyre option which produced improved results. Hopefully it will remain dry tomorrow so we have the opportunity to further improve on today's setting and work on choosing a race tyre for Sunday. The team has been working very hard and has done a great job. Let's hope that we'll find the perfect set up to be as competitive as we can be and should be and have two good races on Sunday."

Eugene Laverty
Yamaha World Superbike Team - 6th, 1'36.713
"This morning didn't go so well, we ended the session down in 17th position but I wasn't concerned because I had quite a good feeling on the bike. Having said that we did have a little wheeling issue but seen as it's my first time riding a Superbike, I think that was to be expected. The team worked hard and improved that before this afternoon's session which went much better. Checa was fast in the tests here a month ago, he was fast again today so it was great to be so close to him after just one day on the track with my R1. Hopefully tomorrow will be dry enabling us to work some more on the Sunday's race set up which is already at a good point."

"It was a good start to the weekend for both riders considering that we have't tested the track unlike many other riders out there today. We made the most of this morning to gather data and see how to improve from there. Both riders made great progress. Eugene suffered from a wheeling problem in one particular section in this morning's practice so he and the team worked hard to resolve this before this afternoon session. Marco had a chance to regain confidence after the disappointing weekend in Miller. It's important to be consistent throughout the race to enable him to get good results and reduce the gap between him and Checa in the lead. Both teams worked hard on finding a suitable the race set up, considering they may not have the same opportunity tomorrow if the rain doesn't hold off. They still need to choose the right tyre depending on track temperatures but we are satisfied with the results today." 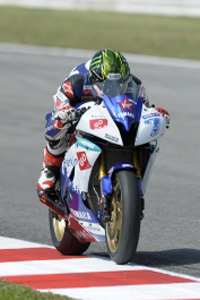 Leader in the 2011 Word Supersport standings and winner of the last two rounds of the championship, Chaz Davies got back on his R6 machine today after over a month's break between races and got straight down to business in Misano to shine in today's sunny first Qualifying session. The Brit spent this morning's free practice session shaking off the rust and getting re-acquainted with his powerful machine ahead of the afternoon's session where he proceeded to be consistently fast and completed the day in second place, just less than a tenth off Lowes in first place.


Team-mate Luca Scassa is not participating in this weekend's race,disqualified by race direction following an infringement of the rules. Giugliano Rovelli, Yamaha ParkinGÃ² team manager, has taken this opportunity to temporarily stand in and ride his private YZF-R6 in Misano. He will not be riding the Yamaha Motor Europe World Supersport machine which Chaz Davies is competing on and which Luca Scassa will return to ride in Arragon next week.

Chaz Davies
Yamaha ParkinGo Team
"Not a bad day even though I felt a bit rusty this morning after a few weeks off. Things clicked better into place this afternoon and the qualifying session went well. This is also very important as tomorrow it could rain so Im glad that today's set up felt good."