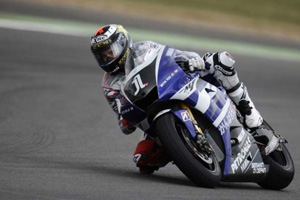 Yamaha Factory Racing riders Jorge Lorenzo and Ben Spies experienced the famed English weather today as they took to the Silverstone circuit for the Grand Prix of Great Britain's first day of practice. The day started well with the morning's session run on a dry track but the rain soon made an appearance, making all but the last 10 minutes of the afternoon's heat wet. The sun came out for the final few minutes and created some dry patches which allowed the times to start to come down.


Both riders ended the day with good base wet and dry set ups but looking for more dry time tomorrow for further changes ahead of the afternoon's qualifying session. Lorenzo was less satisfied than his team mate having struggled to match his pace of last year.

"I'm not so satisfied with the day. In the morning I tried to ride the same pace as last year but I was one second slower. In the afternoon I wanted to ride in dry conditions but it started to rain so we had to ride on that. I made so many laps with the rain tyre that it was destroyed whereas some of the other riders switched to a fresh tyre so were faster than us. I think we have a good set up for wet conditions now. We must focus on improving both myself and the bike, I will try to be on the front row tomorrow."

"It was a good first day, very productive. We were quick in both sessions. I've never had a really good feeling with the bike in the rain before but here we didn't have to push too hard and were up close to the front guys. There is a couple of things we wanted to test in the dry which we didn't get a chance to do but we still ended up with good consistent fast times. We need to be a bit quicker but we'll get there. We need to be on the first two rows tomorrow to be able to fight for the race."

"The first free practice went ok, it was quite cool this morning with no big problems. We took some comments from Jorge to improve the rear grip a little. The afternoon was tough with a half dry and half wet track. Jorge stayed out to get a rhythm and find a good feel for those conditions. In the end his feeling is ok so we are quite satisfied with the package we have at the moment."

"Due to the weather conditions we couldn't do a final dry race set up on either side but we are not so far off and Ben is quite satisfied in both dry and wet conditions. Tomorrow the weather forecast is good, it should be dry so we can finalise the job we couldn't do today and I'm confident both our riders will be ready to challenge for the best possible qualifying positions."

Crutchlow impresses in front of home fans at Silverstone


This morning's session was held in cool but dry conditions and it didn't take long for Crutchlow to settle into a fast and consistent rhythm, the 25-year-old finishing sixth quickest with a best time of 2.05.007.


Crutchlow was confident of making further big improvements this afternoon, but forecast rain showers duly arrived in the earlier 125cc session. The second MotoGP session got underway on a wet track, but with some sections drying quickly, Crutchlow was presented wi th unpredictable riding conditions.


Despite minimal experience of riding his Monster Yamaha Tech 3 YZR-M1 in the wet, Crutchlow displayed all his skills and versatility to produce an outstanding performance on his way to setting the fourth quickest time. He ended with a best time of 2.18.109 and was only behind Casey Stoner, Marco Simoncelli and Nicky Hayden at the end of the session.


Colin Edwards understandably adopted a cautious approach to proceedings today, the American riding just a week after he broke his right collarbone in a practice crash for the Catalunya round.


This morning's session was a physically demanding exercise for the 37-year-old and he rode at a steady pace to gauge the strength in his right shoulder and build up his confidence again after last week's heavy crash at the Montmelo circuit.


Edwards welcomed the arrival of the rai n more than anyone else, with wet conditions easing the physical demands of tackling the super fast and technical Silverstone track. He finished 16th in both sessions but is confident in wet or dry conditions that he can fight for a points scoring finish in Sunday's race, which is the sixth round of the 2011 MotoGP World Championship.

"I wasn't too happy with this morning even though I was in the top six. I had some stability issues with the bike and without that I felt I could have been in the top four this morning as well. We had a few issues to solve and it would have been good to have a dry session this afternoon to work on improving the bike. At least we got an opportunity to do some laps in the wet, so we'll have some experience of the track in those conditions if we get rain on Sunday. I'd li ke it to be a dry race so I can show what I can do, but I feel we're competitive in the wet as well. The conditions this afternoon were unbelievable. It was soaking wet in parts but in other parts, how quickly it dried out was incredible. One corner would be wet and then the next dry, so it was a case of understanding when and where you could push to gain time. The Bridgestone rain tyres held up brilliantly on the drier parts but going from dry to wet conditions is not easy because there is so much heat being generated in the tyres, it is easy to make a mistake. The support from the British crowd has been fantastic so far and I've been making solid progress, so I want to aim for the front row tomorrow."

Today was all about getting back on the bike and building up some confidence after last week's crash. I wasn't going to do any thing too crazy but the shoulder definitely hurts a bit. I'm in a bit of pain in the braking zone for right-handers and unfortunately this a right-handed track. Honestly speaking though the shoulder feels better than I thought it would. In the dry and the wet I was just riding really timid, particularly this afternoon on the wet track. The conditions were just about the worst imaginable because one corner would be dry and the next wet. Some parts were drying really quick while others it was still soaking wet. I had nothing to prove but at least with that wet session we've got a feel for the track if it rains on Sunday. Right now, I certainly won't be upset if the race is wet on Sunday. I'll take a wet race right now because the stress on the shoulder is a lot less than in the dry, but we'llhave to wait and see what happens with the weather."