MotoGP Comes Alive On The Streets Of Barcelona 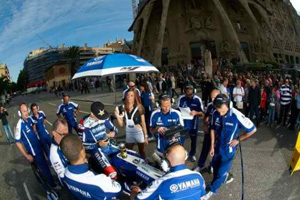 The normal Wednesday commute to work for the residents of downtown Barcelona was transformed this morning as MotoGP came alive on the doorstep of the iconic Sagrada Familia in the heart of the city. The area was brought to a standstill as commuters, tourists and local workers alike were witness to a personal MotoGP grid experience courtesy of Yamaha Factory Racing and reigning World Champion Jorge Lorenzo.

The five minute spectacle began as a lone Umbrella girl appeared in the middle of the road, swiftly followed by the incredible sight of Lorenzo riding his M1 into the street. An orchestra of activity followed as mechanics, data engineers, Team Managers and the Crew Chief appeared from seemingly nowhere to deliver a cheeky pit stop and grid start for the local champion.

As the '30 second' board was raised Lorenzo's YZR-M1 barked into life and as the lights went out the crowd were treated to a sonic explosion as the Mallorcan took off, vanishing as quickly as he had appeared. Moments later the assembled Yamaha crew had melted back into the surroundings, leaving just the echo of the M1 bouncing of the Sagrada Familia as evidence of that they had ever been there at all.

If you weren't one of the lucky ones present to join in the morning's fun with Yamaha you can relive the experience online, simply click the following link to see MotoGP brought to life on the streets of Barcelona.