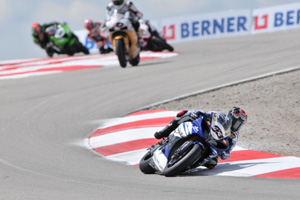 Yamaha World Superbike riders Eugene Laverty and Marco Melandri fought hard in difficult conditions in Miller Motorsports Park today, U.S. " Memorial Day" Monday, to take home well-earned points and with both riders now in the top four on the 2011 Championship standings. Variable weather conditions throughout the weekend did not render the infamously difficult and technically demanding American track any easier. Melandri tried his R1 machine in Miller for his first time ever on a dry track in Saturday's first qualifying, conditions that did not represent themselves until today's races. With Sunday's extremely wet weather the Italian was unable to improve various potential dry chassis set ups on the second qualifying day.


An eventful Race one saw several riders crash out of contention at the early stages. Laverty and Melandri got perfect initial starts off their front row places on the grid but unfortunately fell back several positions before entering the first corner. A shifting error on the long straight after the start saw Laverty falling to 15th place before entering the first curve. Impressive race craft was on display as the determined World Superbike Rookie put his head down, gradually closed in on contenders ahead, taking him up to fourth place by lap nine. The Irishman then took on Camier and Guintoli to sit in second place by mid race behind race leader and eventual winner Checa, until extreme tyre wear prevented him from continuing to perform to his full potential. Fighting hard Laverty relentlessly surrendered his podium and crossed the chequered flag in fifth place, just behind Camier in fourth. Melandri was subject to a difficult race one losing three places in early stages of the race, bumping him to seventh. The Italian fought hard to re-claim positions but suffering from tyre wear he completed the race in tenth place. Race two proved to be equally challenging for the Yamaha World Superbike riders. An ideal start allowed both riders to maintain their third and fourth grid positions. Laverty demonstrated to be a skillful rider yet again, pacing himself throughout the race to prevent tyre wear and eventually crossed the line in fourth place in a race won by Checa again. Melandri struggled to keep his initial position and fell back to sixth place by mid race. Fighting off advances from Guintoli and Smrz, the Italian completed the second race in sixth place.


The Yamaha World Superbike Team leaves Miller topping the Team standings with 243 points. Marco Melandri remains in second position in the 2011 Championship standings, 61 points behind Checa in the lead and one point ahead of Biaggi in third while his team-mate Eugene Laverty has jumped up to fourth place in the classification with 109 points. Both riders head to Misano on the 12th June intent on demonstrating yet again to be strong contenders for the championship title.

"It was a very difficult day all round. In race one I got off to a good start but I touched Haga at the beginning and let several riders fly by. After a few laps I hit the kerb-stone with the engine cover and the bike leaked a bit of oil on the gearshifter so I had difficulty preventing my foot from slipping. Mid race I also had a problem with the rear tyre which seemed to move and it wasn't easy to keep the bike stable. Race two was another difficult race, the worst for me this year. I couldn't perform and prove my potential at any stage. I had set up issues from the very beginning especially on entering curves. I did my best to find a consistent race pace but it was impossible. This isn't the type of race I should be doing as this way you don't win championships."

"I managed to get a great start off the line in both races and maintain my starting position into the first curve. In race one I made a mistake changing the gears which caused me to drop back to 15th. I climbed up to second by mid race but then I began to suffer from extreme tyre wear. We improved the chassis setting before race two and I was a lot more cautious with the tyre. I was sitting in third place from early on but I didn't want to push too hard in on Max to ensure the tyres would last to the end. I'm quite happy having finished fifth and fourth in the two races and I'm now fourth in the standings, which I'm pleased with."

"We expected Marco to have some difficulty this weekend due to the weather conditions and the fact that he was unfamiliar with the track. Having said this we hoped do better. Both riders had major problems with the tyres in race one as it seemed virtually all four cylinder bikes had. Fortunately in race two this was better perhaps due to slightly higher temperatures and less tyre spinning as a result of a cleaner track following the races earlier in the day. With Marco we lost too many points this weekend and cannot be satisfied. Eugene grit his teeth and would have been on the podium for sure had he not experienced tyre issues causing him to drop from second place to fifth in race one. He re-confirmed his quality and potential again in race two. Let's not forget that Eugene is still only a WSB Rookie and is performing extremely well. "