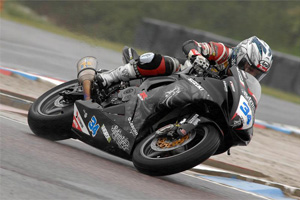 Alastair Seeley suffered cruel luck in the today's second British Supersport Championship race at Thruxton, being forced to retire with an electrical problem after streaking to what looked like an unassailable seven-second lead.


But despite his disappointment, the Ulsterman maintained his second place in the Championship standings and is upbeat and looking forward to the next round at Knockhill in Scotland on June 19th.

"To say I am disappointed is an understatement. Philip and I had made a plan to get into the lead and pull the pin to break them and that's exactly what I did. I did have a couple of moments but once I had the gap I calmed down and just watched my board. The bike just seemed to tighten up and it wouldn't rev so I pulled in. It just wasn't meant to be. We have a bit of a break now before Knockhill, so we can look to improve and make another push to close the gap down on Ben."

"What can you say about Alastair? He had a great ride yesterday and showed his confidence today in the wet by totally dominating that race - domination that you don't normally see in the Supersport class and he was very impressive to watch. He was robbed by a minor electrical problem, which was not even a Suzuki part. I feel bad for the team and also for our sponsors but I especially feel bad for Alastair. He really has found his stride now, wet or dry, and we must re-group and look forward to Knockhill. As I've said before it's a long season and with two races a weekend, Alastair is still in with a big shout of this Championship."