Hopkins And Suzuki Podium At Thruxton 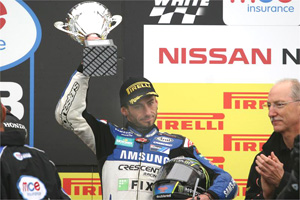 John Hopkins made it five podiums from his last six races after two gritty performances today at the fourth round of the 2011 British Superbikes Championship at Thruxton in Hampshire as the Samsung Crescent Racing rider fought vision problems caused by wet weather to place 4-3 in today's races.


Hopkins' team mate Jon Kirkham was forced out of race one with set-up problems but came back strong in race two, climbing from a P25 start position to place a worthy ninth.

"Today reminded us we're racing in England; it was about time we had a wet race! I can't say I welcomed it because after getting to grips with the circuit in last practice and qualifying I was looking forward to some real race battles.


"My bike was excellent in both races, but I struggled with vision - the rain was getting on the inside of the visor. In race one I elected to take it steady as I'd not ridden this circuit in the wet, but by the end I was feeling stronger and despite my visor I was able to make back some positions to finish fourth. In race two I was again struggling to see and this time the spray was truly awful, but my bike was excellent and it helped me to make the push at the end for the podium finish."

"I had a serious set-up problem in race one that meant I had very little rear grip. I carried on for as long as I could but once any chance of championship points had gone I stopped - it was too dangerous.


"Race two was much better, but with having to start from 25th and with it being so wet it was a real struggle to pass. On lap one I was motoring down the back straight at about 190mph when I ran off the track - the spray was that heavy I couldn't see where the track ended and the grass began!


"I know I have the speed and my race craft is good, so while I dropped out of the top six today, I'm confident I can regain those places."

"Hopper was brilliant again today and there was a lot for him to contend with: learning Thruxton in the wet, major issues with his visor; and a bunch of British lads who just love these conditions. But again he kept his head. He actually led quite a few laps, but he was calm when he was overtaken, learned what he could from following and then applied this by the race end.


"JK had a real tough time. There was a lot of commotion before the start of the first race and in all the hustle and bustle he found himself on the start with the wrong rear set-up for the conditions. His comeback in race two was another great performance and to pass 16 people in such awful conditions was incredible. A great bit of damage limitation.


"So, not our best weekend but both riders, and the team, have learnt from the experience. Hopper has strengthened his grip on the second position in the points tables and really not lost that many to the leader. JK's performing consistently well as a rider; we just need to tidy up on some of the 'bad luck' and he'll right in the thick of the fight."