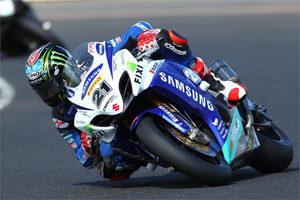 Samsung Crescent Racing heads to round four of the 2011 British Superbikes Championship at Thruxton in Hampshire this weekend, looking to build on its already impressive standings in the BSB title race.


John Hopkins - currently second in the title standings - hopes to continue his run of four consecutive podium finishes on the Suzuki GSX-R1000 that have made him joint leader in the BSB Podium Credits table. However, as a series rookie, Hopkins concedes that, as he's never ridden the Thruxton circuit before, which is one of the fastest in the series, he'll have a tough weekend ahead.


Team mate Jon Kirkham is more familiar with the circuit, through his British Superstock exploits. And, after his debut BSB win at Croft - which helped elevate him into the top-six 'Title Fighters' in the Championship - he'll be looking for more leaderboard finishes. Kirkham is, however, still feeling the after-effects of his big second race crash at Croft, caused by another rider ploughing into him.

"We're in a competitive situation - I don't think before the season started, even on my most optimistic day, I would have predicted I'd be in second place now, just a few points off the lead. But I'm not going to let that alter my approach; the goal has always been to be in the top six, learning as much as I can as I go, so that I'm best-placed come the three-round Showdown at the end of the year - that's when everything really has to come together."

"I'm definitely still sore after the Croft crash. I think if it hadn't been for the air fences I'd be in a much worst state, but anytime two bikes chase you into a barrier you're going to feel a little second-hand.


"I'm looking forward to Thruxton, though. I've had some success there with an R1 Cup race win and I nearly won a Superstock race there (not last year). So I'll aim to have two solid finishes and see if I can improve my position in the top-six. I'm usually a consistent rider so for my results to read like they have this year - with two DNFs - is not typical me. I'll look to correct that and push on."

"We're in good shape as a team and we had good results here last year, so we have reason to be optimistic. Similar results to those we had at Croft will do nicely!


"I'm hoping JK gets a good run this weekend. We've seen his results improve as he's implemented all that he learnt in pre-season testing. He always had top-six speed, and now his results are reflecting that. I'm expecting more good news on his account this weekend.


"Hopper has a mammoth task ahead of him, learning a dauntingly-fast and tricky circuit. But no doubt he'll do exactly as he has done so far this season - do his own thing, letting the speed come to him. It's a big ask to see him on the podium again, but he's shown four-times on the bounce that he has the capability to do exactly that.


"Finally, I'd just like to say a Get Well Soon to Stuart Easton from all of us. Our thoughts are with him and his family after his NW200 crash. We will miss him at Thruxton. We hope to see him and his family back with us as soon as is comfortably possible."