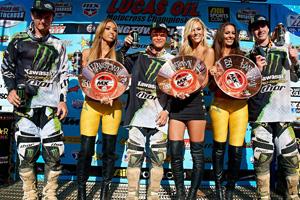 If the first race is any indication, it looks like the 250cc class of the Lucas Oil AMA Motocross Championship will be one to watch this season, as the competition was fast and furious between the members of the massive 40-rider pack that competed this past weekend at Hangtown in Orangevale, California.

The opening race was dominated by Kawasaki, as three riders from Team Green comprised the overall podium at the end of the day. Coming in second during the first race and winning the second one, Blake Baggett established himself at the top of the leaderboard. He was followed closely by teammate Dean Wilson, who won the first race but slipped to third in the second. Tyla Rattray rounded out the top three, finishing 5th in the first race followed up by a strong second.

Still, it wouldn't be a 250cc race without Eli Tomac, and the rider didn't completely disappear from the radar. Coming off of his Supercross Lites win and a victory in the championship here last year, the rider put in a strong showing of third and fourth place on the day, which was good enough for fourth overall.