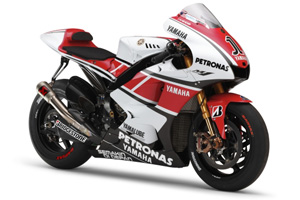 2011 marks a very special moment in two wheeled motorsport as the 50th Anniversary of World Championship Grand Prix racing for Yamaha. As part of a series of ongoing activities to celebrate this landmark Yamaha Factory Racing will run a special livery, the 'YZR-M1 WGP50th Anniversary Edition' for the Assen TT and Laguna Seca races.

Reigning MotoGP World Champion Jorge Lorenzo and 2010 Rookie of the Year Ben Spies will unveil the livery at a special event on Wednesday 22nd June close to the Assen circuit.

The Yamaha World GP 50th Anniversary is also celebrated online with a special dedicated website www.yamaha-motor.co.jp/global/race/wgp-50th/ (English). The website features an impressive archive tracking the history of Yamaha's involvement with racing along with detailed historical information. Throughout the season the site will be regularly updated with columns and videos along with exclusive messages and interviews of key people involved in the World Championship Grand Prix racing story of Yamaha. 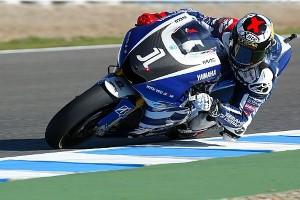 Yamaha Celebrates 50th Anniversary with New Paint Scheme
Yamaha riders Ben Spies and Jorge Lorenzo will be getting a fresh look for their bikes during the upcoming races in Assen Holland, and the USGP in Laguna Seca, Texas, as the manufacturer has unveiled a new throwback paint scheme that celebrates Yamaha's fiftieth anniversary.

The company actually dates back far longer than that, but this year marks the fiftieth year of involvement in World Grand Prix racing. As such, the riders' bikes will be getting the new "YZR-M1 WGP50th Anniversary Edition," which is in stark contrast to the current blues favored by the racing team.

Fans of racing history likely remember the sleek red-and-white Yamaha machines that tore up international tracks in years past, and the next two races will see that look revived. The dual-color scheme is elegant and classic, yet at the same time seems to fit right in with the modern bikes.

For the rest of the season, Spies and Lorenzo's bikes will be sporting a new "Fiftieth Anniversary" logo as well, which will be displayed prominently on the bikes' fuel tanks.

If racing fans would like to learn more about Yamaha's history in racing, the manufacturer has also launched a special website that takes a look back at the company's many accomplishments in the sport over the years.