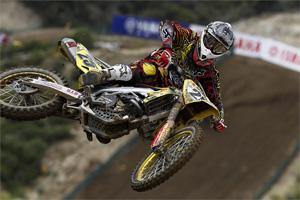 This past weekend's Motocross Grand Prix event at Glen Helen Raceway was a little bit repetitive, but the fans and spectators certainly didn't mind.

Both of the eventual winners won two races on Sunday on their route to the gold, in dominant performances from Ken Roczen in the MX2 division and Clement Desalle for MX1.

Roczen shot out to an early lead in the first MX2 race and never looked back. There was a bit of rain before the race got started, but the track fortunately held up well given the conditions. Roczen returned later in the day to win the second race and take the weekend overall. Roczen's teammate, Jeffrey Herlings, was second in both races, capping off a solid day of racing.

In the MX1 division, Desalle also won both races. Red Bull KTM rider Max Nagl seriously challenged Desalle in the second race after the rider finished third in the first. However, he eventually had to settle for second in both the latter race and the weekend overall.

Despite the rain and the mirror-image races, the race went off without a hitch, which is sure to improve Glen Helen's relationship with FIM. The racetrack stepped in to host a Grand Prix at the last minute in 2010, so hopefully this is the start of a long relationship that will see Glen Helen returned to year after year.