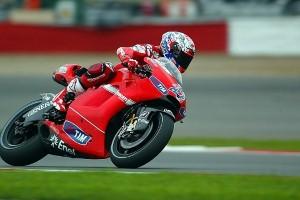 Casey Stoner got off on the right foot for Sunday's Grand Prix at Le Mans on Friday, as the Repsol Honda rider had the fastest practice time of the MotoGP field.

In fact, Honda continued to dominate this year's MotoGP season, taking the top three slots on the practice leaderboard. Marco Simoncelli was just .4 seconds off of Stoner's lead time of 1:33:782, and Dani Pedrosa was extremely close as well, coming in third overall.

Nicky Hayden of Ducati and Jorge Lorenzo of Yamaha came in fourth and fifth in terms of times. It's good news for Hayden and the Ducati team, who rarely see themselves that high on the board. On the other hand, Lorenzo will need to improve his time if he intends to keep up the pressure on the Honda squad.

Fan favorites Ben Spies and Valentino Rossi didn't have great runs to start off the weekend, finishing more than a second behind Stoner. These riders were on the edge of cracking 1:35:00, so they've got some work to do before the big race this Sunday.