Successful Testing In Aragon For The Yamaha World Superbike Team 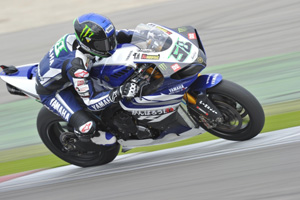 As the dust settles on the last round of the World Superbike Championship in Monza where Laverty took a sensational double victory, the Yamaha WSB Team got straight down to business in Aragon - Spain, testing the track ahead of next month's race.


Marco Melandri and Eugene Laverty wrapped up two successful days testing today. The new entry on the 2011 WSB calendar is completely new to Laverty while Melandri encountered the track just once, in the 2010 MotoGP. The team experienced good weather conditions in Aragon, dry and cloudy in the mornings with the sun breaking through in the early afternoon. The Spanish track was not as warm as expected for this time of year and certainly should be much warmer by mid-June, but despite this factor the Yamaha World Superbike riders put in two fruitful days testing, learning the track and working on suitable set-ups for their R1s ahead of next month's race.


The first day of testing was concentrated principally on getting acquainted with the new track which offers plenty of grip, tight corners and long straights. On day two Laverty proceeded to test the tyre wear, working on race simulation where he completed a series of consistent laps, in order to find a suitable set-up which reduces wear and tear on a track that's particularly harsh on rubber. Both Yamaha World Superbike riders worked on their R1s, modifying the chassis set up, gearbox and electronics. Melandri concentrated on evaluating the rear of his machine, gathering necessary data to make improvements.Both Yamaha WSB riders come away from the Spanish track in Aragon confident of having completed two successful days testing.

"I like Aragon, it's an interesting one, yet not simple at all. I just wanted to learn the track and I'm glad we had this opportunity. It was tricky to get good speed in due to the fast change of direction. I worked a lot on improving my lining and adjusting my riding style to suit the flow of the track. The bike was working very well though and I'm pretty sure that we can head to the race here next month with confidence."

"We worked very hard over the last two days. I had some problems with the bike in Monza and that's become clearer now in Aragon. I suffered a lack of stability on exiting curves but we started working on solving the problem and the input from this track has been extremely useful. We have a lot of work to do still, but I'm definitely more confident and I'm glad we had the opportunity to test here."

"We have had a positive two days in Aragon. The main objective was to get to know the track and gather some useful data before the next month's race. The two teams have worked on adjusting the gearbox, chassis set-up and the electronics to better suit the tight corners the track has to offer. Eugene has also had to adjust his style of riding and adapt a floating style which is required by the track. Marco has made progress in the development of his R1. He encountered some difficulty in Monza and the tests have helped us to distinguish what happened and gather data to enable us to improve the overall set up."

World Supersport Team, Yamaha ParkinGO joined forces with the World Superbike Team for two days testing on the new 2011 calendar stop off , in Aragon. Chaz Davies and Luca Scassa, fresh off the podium in Monza, didn't hasten to put their YZF R6 machines to the test.


Making the most of the dry conditions, the Yamaha ParkinGO team riders didn't delay on getting down to business on the Spanish track. Both Chaz Davies and Luca Scassa had experienced the circuit last autumn with a different bike before jumping on the Yamaha at the start of the 2011 season. The two ParkinGO riders were enthusiastic to take their R6s to get acquainted with Aragon and thus head to the race there next month confidently aiming to defend their current championship status.


The team was also eager to gather valuable data from which to work over the coming month. Both riders' teams concentrated on developing the set-up, modifying the gearbox and suspension in particular, to suit the track, which they found particularly grippy due the recent car racing events held there. Scassa worked on basic set up and tyre wear throughout the two day test. Davies focused on adapting his machine to suit the extreme grip he experienced in contrast to when he last rode the track. Both riders enjoyed the track, putting in consistently fast laps.

"I'm really happy with the two days testing. I really got to know how the R6 reacts on the track and from there we got lots of useful information to work on and develop the bike. I'll be missing out on the next race in Misano and therefore it was really important for me to get as much data as possible here to work on and ensure that I am capable of making a good come back at this track. "

"Not a bad two days testing. We put in quite a lot of laps which served to gather some useful input for the bike in general and how it reacts to the various elements of the track. The team and I worked hard and we've made good progress. We've modified the bike to suit the track grip. I found n huge difference in grip in just a few months, which was quite strange. But in general I'm really pleased with how it went. "