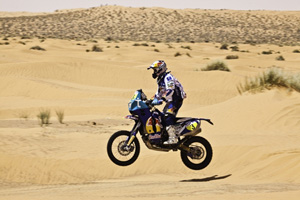 WR450F rider Helder Rodrigues is fronting the FIM Cross-Country Rallies World Championship after two rounds thanks to his victory last week at the OiLibya Rally of Tunisia.


The Portuguese Dakar stage winner finished second at the Abu Dhabi Desert Challenge during April (the opening event of four in the 2011 schedule) but was able to go one better through the North African dunes - six stages and 1800km of riding - heading Jakub Przygonski and Jacek Czachor on the podium. Fellow Yamaha rider Jordi Viladoms was able to reach the finish line first in the final stage but just missed out on the top three.


"I am so happy," said Rodrigues. "I have been waiting a long time for this moment. I want to thank all my partners and the people who believed in me. If I'm here today it's mainly thanks to all those people. It is obvious that my season has started very strongly and this is great in our preparation for the 2012 Dakar."


Rodrigues heads the standings by five points from Przygonski at the half way stage with riders award points similar to a motocross grand prix event; the winner taking 25, second place 22 and third 20 and so on. Round three will take place over a week at the end of May on the island of Sardinia with the final meeting occurring in Eygpt for the Pharaoh's Rally in October.