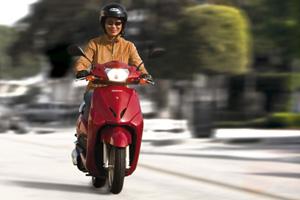 High gas prices may be hurting some sectors of the American economy, but others are booming. One of the groups that is really benefiting from the spike in fuel costs is scooter manufacturers.

According to data from the Motorcycle Industry Council reported by USA Today, sales of gas-powered scooters are up a whopping 50 percent as compared to the same period in 2010.

If sales really are rising due to fuel costs, its easy to see why. Scooters don't represent a big investment for most riders, as they typically retail for a few thousand dollars, with scooter helmets available for less than $100. For those who live in urban areas, that makes them a much smarter choice than spending tens of thousands on a new car. The vehicles typically average anywhere from 60 to 80 miles per gallon.

Meanwhile, many are choosing to avoid gas altogether and are opting for non-motorized bikes, according to the news source. Sales of new bikes jumped 9 percent and road bikes were up 29 percent. However, representatives for the biking industry said that it's unclear if the uptick could be tied to fuel prices.