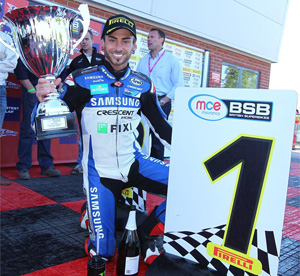 John Hopkins made history today when he became the first American to win a British Superbike Championship race. And the Samsung Crescent Racing rider's victory at Cheshire's Oulton Park circuit came straight after his previous inclusion as the first American to stand on a BSB podium, with second place in the first race.

It was a highly successful outcome for the Suzuki GSX-R1000-mounted team in the second round of the series as Hopkins' team mate Jon Kirkham raced to two fighting seventh place finishes.

The substantial points haul elevates Hopkins to fourth in the BSB Championship, inside the all-important top-six Title Fighters. As well, with two podiums, Hopkins netted five podium credits moving him into the joint lead of the Podium Table. Kirkham, too, moved up the points standings to eighth, significantly now just six points adrift of the Title Fighters. Inclusion in the top six Title Fighters is vitally important for Championship success as only the top six in the points standings qualify to compete for the title of British Superbike Champion over the final three rounds of the season. 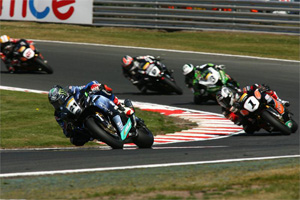 John Hopkins
"That was good, really good. It's an awesome track, I really enjoyed riding here, but as well what great fan support! It's been 11 years since I last won a race - that and all that's happened to me over the past few years meant that this was one emotional win. I was definitely teary-eyed on the podium. I couldn't be happier.

"The racing, as before at Brands Hatch, was intense; there was carnage at times. But with my motocross background I can endure that. The first race went well and I started well and went with the leaders. At the end of the race I got into second and I had to ride for the finish at that point, but that's never a satisfying feeling.

"So I knew I wanted to win the second race. Curiously that race didn't go so well early on and I dropped back after the start. I regrouped but still had a lot of work to do to catch the two leaders, so I was definitely the man who gained the most when one of them crashed bringing out the pace car. Even after that it came down to a three-way battle. But the bike felt so good I knew the win was possible. I took the lead with two laps to go and never looked back. A big thank you to the crew for this weekend. I couldn't have done it without them." 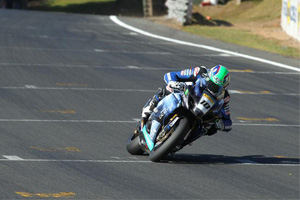 Jon Kirkham
"I was very pleased with that first race. I'd left myself with a lot of work to do after qualifying 16th yesterday. To come through, picking them off one-by-one, to take seventh felt really good.

"I had a second row start then for the second race, but I got a terrible start, so I had the hard work to do all over again. I got up to Michael Rutter in sixth but was struggling to find the grip to get past him, so I had to settle for seventh again. It was a great weekend, though. Being in the team camp with all that was happening with Hopper was exciting enough, but to find myself mixing it up with the likes of Shane Byrne felt fantastic. I'm really looking forward to the next round." 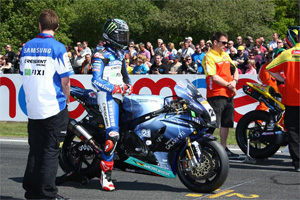 Jack Valentine
Team Manager
"What a tremendous weekend! Hopper was brilliant, taking his time to learn the track and working hard with his crew to find the set-up on his bike that made these results possible. With every ride he built on the success of the last.

"At Brands Hatch last weekend he learned just how tough BSB can be. This weekend he applied those lessons. Oulton Park is not an easy track to master, not by any measure, so his performance this weekend shows he's very much a contender for this Championship.

"JK has been brilliant as well. We mustn't forget he's virtually a rookie to BSB; he's never before traded positions with the country's elite riders, but he was doing that this weekend. For him to take the fastest lap in the second race as well - that's icing on the cake. And equally important, he's doing all this while looking so smooth, so controlled - and fast!

"We can't be anything less than delighted with the outcome this weekend. This is a big reward for our new sponsors Samsung, for Fixi and Drive Business as well as our long standing sponsors, without whom we wouldn't be here. Lastly, it has to be said that these results are never possible without the team also performing at their best and I want to give huge credit to both riders' crews; they've truly excelled this weekend."