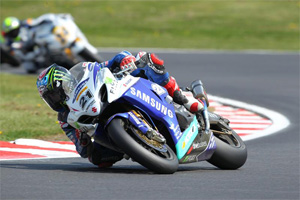 Samsung Crescent Racing scored two top-five finishes in the opening round of the British Superbike Championship at Brands Hatch, despite suffering a crash and a DNS from Suzuki-mounted John Hopkins and Jon Kirkham.


In race one, Hopkins started well and very quickly was inside the top-six, but on lap 11, while pushing to make a pass for fifth, Hopkins slid off at Druids. He remounted and was able to regain 17th place by the chequered flag.


Kirkham's race didn't start so positively, placing as low as 15th place, but as ever, employing consistency and a very decent turn of speed, he was able to fight his way to fifth position by the end of the race, 3.5-seconds behind the winner.


Both Hopkins and Kirkham had second-row start positions for race two, but unfortunately Kirkham's bike suffered a component failure during the warm-up lap and he was unable to start. But Hopkins held position from the start and at half-distance was able to move up to fifth, but with the top-four a few too many seconds ahead, he was unable to improve on his position before the finish.

"Not my greatest day, not my worst. We started the day well; we'd made some changes overnight and that made a difference - third fastest, and my personal best of the weekend, in warm-up. I was pleased with my start in the first race; I got through some traffic but then got stuck behind Stuart Easton. When it comes down to tenths-of-a-second between you and then next guy, then passing isn't easy, and so when I was pushing it into Druids it didn't take much to run wide, and then go down. I picked it back up but couldn't get back into the points.


"I didn't get the best start in race two: In fact I got bumped as I went into turn one and this cost me a few places. Again I found myself coming back though and again finding Stuart Easton mid-race. I took my time second time around and made sure it was a safe pass - I wanted some points from this weekend. After that there was too-big-a-gap to the guys in front and it wasn't worth risking another fall to try and catch them."

"That was an amazing first race. I got a bad start and so had a busy time making back the places. Then just when I'd got up to a decent position, I got punted off the track and found I had to do the work all over again. It was mayhem in that race; bikes and riders going in all directions it seemed. I was so pleased to make fifth.


"To not even get to start the second race was really disappointing, I was looking to build on race one, but that's racing. So I'm really looking forward to Oulton Park now as it's one of my favourite tracks."

"The day started so promisingly, but it just didn't go our way. It's frustrating. I'm happy with the lads' riding, though. Hopper was right to take a safe strategy to the second half of the second race; to take the points. And JK was brilliant in race one - a few more laps and maybe he could have been on the podium. To be denied a start in the second race because of the failure of a 25p component is tough, but by then JK had already done enough to show he's a serious contender in this Championship.


"Of course I'd be happier if we'd had four top-five results, not the two, but others suffered worse. It's a long season, and yet round two of the Championship is in just a matter of a few days time. We'll be carrying forward the positives from this weekend."