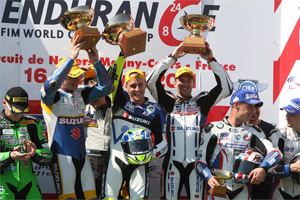 Suzuki Endurance Racing Team has won the opening round of the 2011 Qtel World Endurance Championship - the 24-hour 75th-Anniversary Bol d'Or at Magny Cours in France.


SERT riders Vincent Philippe, Freddy Foray and Anthony Delhalle dominated from the start - even though first rider off at 3pm on Saturday - Philippe - was still feeling the after-affects of a heavy fall in the morning warm-up that meant the team had to use its number two machine for the race. 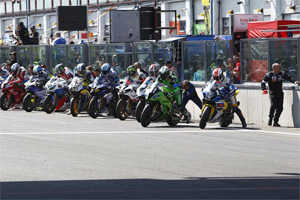 At the five-hour mark, SERT had clocked-up 173 laps; one more than SRS Kawasaki and BMW. Through the night, the Suzuki trio opened the gap to three laps over SRS, with the Bolliger Team Switzerland Kawasaki climbing into the top three places when BMW broke a chain.


From sunrise on Sunday, SERT used its experience to gradually increase its lead - to seven laps at one stage - plus time its pit-stops precisely to bring the GSX-R1000 home to an emphatic home victory for the Le Mans-based squad. 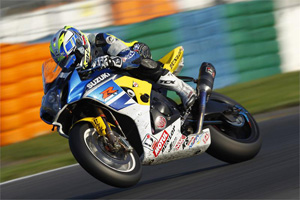 It was the team's fourth-consecutive victory at the Bol d'Or and Philippe's seventh, which equals the record number of rider wins.