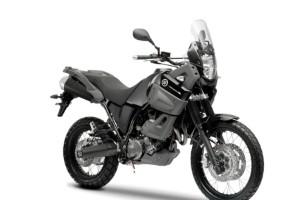 Motorcycles are typically grouped into categories that focus on a particular riding style. For example, sport bikes are tuned for performance, while touring bikes are meant for long journeys. Dirt bikes can handle any type of off-road environment, while street bikes and cruisers are all about tearing up the pavement.

For the uninitiated, this breakdown can be a bit intimidating at first - especially if a rider plans on using their bike for a number of situations. In order to accommodate owners who have varied interests, manufacturers have started to produce hybrid bikes that cross over a number of categories and riding styles. One of the more popular types offered are adventure touring bikes, also known as dual sport motorcycles.

Dual sport bikes sell well because there's really no situation that they can't handle. Consider them a "jack of all trades" model - capable for any type of situation and style but excelling at none in particular. Adventure touring motorcycles get their name because they combine the long-range abilities of a "touring" bike with the off-road prowess of "adventure" models. These bikes are just as comfortable on the road as they are in the mountains or desert.

Since the bikes are good on and off the road, buyers might assume that choosing a model is simple - just pick one out and go. Yet rushing into a dual sport purchase can be a mistake. There are still many factors to consider. These bikes can be somewhat expensive, so it pays to figure out a few things before dropping a significant amount of cash.

We'll be focusing mostly on adventure touring models. These bikes tend to offer a much larger engine with more torque than other dual sport offerings. These vehicles are designed to handle any type of terrain, but are a bit more expensive than some of the other dual sport models.

First and foremost, riders should ask themselves how much off-roading they honestly plan to do. Some dual sport models are essentially glorified dirt bikes that really can't handle top highway speeds. Others are primarily tourers that will not hold up on some of the toughest terrain. Of course, many models strike a happy balance and excel at either. Yet the amount of off-roading a rider expects to do will really narrow down the decision quite a bit. A weekend warrior who plans on using the bike to commute and maybe a few trips on the weekend will be looking for something quite different than someone planning to take their motorcycle on a tour of India.

In general, a good rule of thumb is that the dirt-focused models tend to be the smaller dual sport bikes, as they're a lot easier to handle on rocky terrain. Of course, these bikes can have trouble exceeding 50 miles per hour, so they're not a good choice if a rider is hoping to take a road trip. Meanwhile, riders who choose a bigger bike will be getting something closer to the traditional touring experience, but they'll be giving up a bit of their off-road freedom to do so.

For this article, we'll be focusing mostly on adventure touring models. These bikes tend to offer a much larger engine with more torque than other dual sport offerings. These vehicles are designed to handle any type of terrain, but are a bit more expensive than some of the other dual sport models. The tradeoff is not having to worry too much about whether the bike will be able to make the trip, whether staying on the road or going off.

Beginners should keep in mind that these bikes might present some challenges for those just learning to ride. Dual sport bikes in general are thought to be somewhat easy for beginners, mostly because the natural riding position is simple to get used to. However, adventure touring models present some additional challenges. Since the engine is so much bigger, riders should have some experience before purchasing one of these models. Shorter riders should keep in mind that the bikes are also somewhat taller thanks to their extra-large suspension, which is necessary to handle tough terrain. However, most manufacturers do sell aftermarket lowering kits to overcome this hurdle.

Shoppers in the market for one of these vehicles will have quite a few options to choose from once they've considered the various factors that will affect their decision. To help make the process a bit easier, we're profiling some of the more popular models in the adventure touring segment. 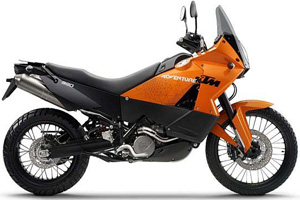 Many pros consider KTM to be the cream of the crop when it comes to off-roading, and the KTM 990 Adventure certainly comes with a price tag to match its sterling reputation. This bike will retail for approximately $15,000, but riders will be getting quite a few features for their money. This model features a 999cc 2-cylinder 4-stroke DOHC engine that produces approximately 74 lb-ft of torque. Checking in at a reported 460 lbs, the big selling point of the KTM is its extremely light curb weight, which allows it to handle extremely well in all conditions despite the big engine.

The KTM 990 Adventure also features electronic fuel injection and an anti-lock brakes system. In addition, the bike comes with a strong racing and touring pedigree, being a popular choice for both enduro series and long road trips through harsh conditions. 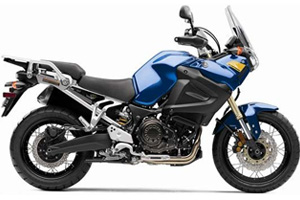 A new model that has been getting quite a bit of attention is the recently-redesigned Yamaha Super TÃ©nÃ©rÃ©. Not many have had a chance to ride this bike yet, as it hasn't been officially released, although pre-orders are being taken now. Racers clearly have a reason to be excited about this new model, however. The 1200cc engine reportedly produces 108 horsepower and 80 lb-ft of torque, making it one of the most powerful adventure touring motorcycles on the market. It can also switch between two different modes, adjusting performance for on- or off-roading.

The Super TÃ©nÃ©rÃ© is heavier than the KTM model at 575 lbs, so riders should be sure that they can handle all of that power. However, if one truly wants to leave others in the dust, it appears to be the best option at the moment. This bike retails for nearly $14,000, so it's not cheap by any means. 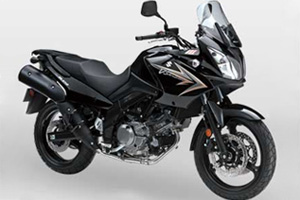 Riders looking to save a bit on their purchase should instead opt for something with a little less power. The Suzuki V-Strom 650 is an excellent example of an adventure touring motorcycle that won't break the bank. This model is only priced at $8,100, but is still not to be taken lightly when it comes to power. Suzuki's V-Strom features a four-stroke V-Twin with 645ccs of displacement. The bike still features the anti-lock brakes system found on more expensive models, which is an added bonus. Plus, the V-Strom is a stylish looking bike, available in either the classic black or a new white finish.

This is just the tip of the iceberg when it comes to adventure touring bikes, so serious riders should consider a wide range of models. The good news is that these bikes are so popular that there's something out there for everyone - it's just a matter of knowing what you're looking for.