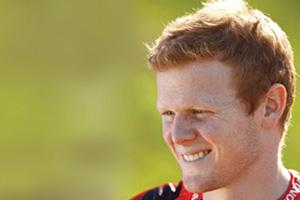 The possible contenders who could end up walking away with the AMA Supercross championship just got a bit smaller, as Trey Canard broke his femur during a practice run and is reportedly done for the season.

Canard, the top rider for Team Honda, was in fifth place on the season and considered to be one of five riders who could conceivably win the whole thing with three races to go. Now, only points leader Ryan Villopoto, Ryan Dungey, Chad Reed and James Stewart have any chance of taking the trophy home.

Because he had four riders in front of him, Canard was considered a long shot, though he was only 20 points behind Villopoto. Canard has been ruled out for the remaining three races on the Supercross schedule as he rehabs the femur. It's a disappointing end for a good season overall for Canard, as the rider was able to win three races.

"The good news is that the fracture is not as severe as it might have been," said Honda Team Racing Manager Eric Kehoe. "We are hopeful Trey's return to racing will come soon. It's very disappointing to see him get hurt, especially after the fantastic Supercross season he's having."

Kehoe went on to say that Canard is on track to be ready for the upcoming AMA Motocross series, where he and teammate Josh Grant will take a run at the title.