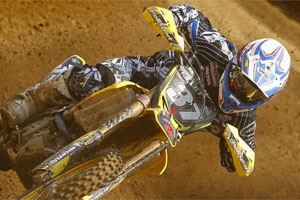 Suzuki Europe MX2 tasted the bitter fortunes of motorsport this weekend at Sevlievo for the Grand Prix of Bulgaria after Valentin Teillet was unable to finish either moto in the opening round of the FIM MX2 World Championship.


The Frenchman needed medical attention after a heavy crash into a low jump during the second race and the extent of the
damage to his right shoulder has yet to be determined.


The hard and fast Sevlievo course saw Teillet - making his debut on the RM-Z250 - taking positions in the top-10 through practice and qualification and was happy with his pace. The first moto ended prematurely with a technical problem; and the team was dismayed when the former European Champion became entangled with a first turn pile-up at the start of the
second moto. It was on a comeback-push through the field that Teillet had his accident. 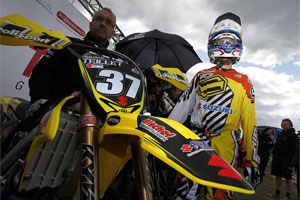 The Grand Prix of the Netherlands, through the dark sand of Valkenswaard, will represent round two and the next engagement on the international stage for the Suzuki Europe MX2 team.

"For sure a weekend that we will want to forget quickly. We didn't have any luck in either race and now our only concern is for Valentin; and we hope his injury does not turn out to be too serious. We experienced the harsh side of racing today and can only hope the good days can come back soon."

An update on the condition of Teillet will be issued soon.