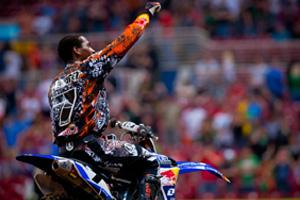 James Stewart was able to put his off-track troubles behind him while piecing together an emotional win at the AMA Supercross premier event in St. Louis.

It's been a rough few months for Stewart, as the rider was once at the top of the standings, but suffered some tough crashes on the track. In his personal life, the Yamaha rider was recently arrested for impersonating a police officer.

Stewart didn't lead out of the gate, but was able to quickly pass the initial frontrunner, Ivan Tedesco, on the second lap. He was able to hold off a strong challenge from defending champion Ryan Dungey on his way to a first place finish. Dungey finished second, while points leader Ryan Villopoto came in third.

"As far as a single race I consider this the top win of my career," Stewart told Cycle News. "I felt like I let my team, my fans, everybody down with the things that have been going on. It's been the toughest time in my life. Getting this win is so great."

With three races to go, the chase for the championship is still up in the air. Villopoto is in the lead, up five points on a determined Dungey. Honda's Chad Reed, who finished fourth in the event, is eight back. Stewart's chances of pulling out a victory are slim, as he's down 16 points, but theoretically possible if he gets a bit lucky and continues putting up first-place finishes.