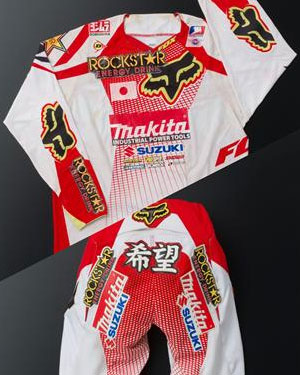 Ryan Dungey and the Rockstar Makita Suzuki team are giving their support to the Japan Earthquake Disaster fund by pledging the special set of Fox race gear, that he wore at the recent Jacksonville AMA/FIM World Supercross race in Florida, for auction to raise money for the victims of the recent earthquake and tsunami.

The exclusive red and white clothing is emblazoned with the Japanese symbol, pronounced 'Kiboh,' which translates into English as 'Hope.' The shirt is also red and white to symbolise the country's Rising Sun flag. As a mark of respect and support, all riders at the March 19th event sported the Japanese flag.

The clothing is to be donated to the Japanese Red Cross via the Motorcycle Federation of Japan (MFJ) and will be included in a special charity auction at the All Japan Motocross Championship round at Hiroshima in May.

Said Dungey: "We're all very appreciative of how Japan has supported us in this industry and racing. I feel like it's our job to do anything that we can do to help them in this time of need and help return the favour. It's going to take a lot for them to rebuild and get back to normal. I just want them to know that we're here for them and they are in our thoughts and prayers."