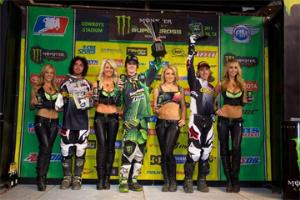 The AMA Supercross East Lites division looks like it will come down to a duel between Honda's Justin Barcia and Kawasaki's Dean Wilson, and fans who attended this Sunday's race in Arlington, Texas, got to see that competition play out on the track.

The two riders have been at the forefront of the standings for most of the season, although Barcia held a 16-point lead over Wilson heading into the race. The Honda rider looked to put things away early, grabbing the holeshot and getting out in front of the pack. He momentarily relinquished the lead to Ryan Sipes, but won it back after Sipes crashed shortly thereafter.

Yet Wilson never gave up and continued racing hard, eventually catching up to Barcia and passing him on lap 13. Barcia returned the favor one lap later and looked to have the race in the bag on the final lap. However, Wilson pulled a risky yet expert move on a turn to cut on the inside of Barcia and was able to hang on for the win.

Wilson only gained three points on Barcia with the win, but kept his dream of a championship alive thanks to some great racing. With two races left to go, he'll need to keep that up and hope for a little luck to pull it out.