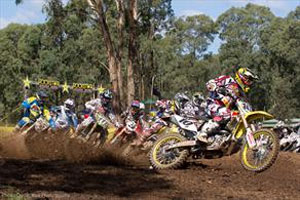 Team Rockstar Motul Suzuki's Pro Open challenger Cody Cooper showed that he is the fastest contender in the 2011 Australian National Motocross Championship - but an injury has temporarily sidelined his Championship challenge.


In the second moto, Cooper had again gapped his competition and was well ahead of the field when he crashed heavily on an uphill double. He re-joined the race and was able to finish the moto but he sustained a rib injury in the crash and was sidelined for the remainder of the day.


It was a disappointing end for the Rockstar Motul Suzuki pilot. Prior to the crash Cooper had clearly demonstrated that he was the man to beat and his race time for moto one proved to be the fastest race of the day.


With only a week before the third round of the Championship, Cooper will face an uphill battle to be fit for Raymond Terrace. However, he has proved his physical and mental toughness on many an occasion, and the team is hesitant to rule out a round three return.


Team Raceline Pirelli Suzuki's Lawson Bopping also had a challenging weekend. A 6-2-DNF-7 result saw him finish seventh on the day and sixth in the Championship.


In the Pro Lites class, Daniel McCoy put in a solid performance over the four motos. McCoy again struggled with poor starts which proved difficult to overcome. His 3-9-6-9 result saw him finish fifth on the day and he currently sits equal-sixth in the Championship.


Team Rockstar Motul Suzuki Team Manager Jay Foreman, was circumspect with the weekend's results. He said: "With Cody, it is what it is. We know he is fast so hopefully he will be fit enough to race next week. This week we will be busy with Daniel to get on top of poor starts. He showed he has the speed to run with the front guys, but he just needs to start with them. We are testing again this week to work on starting techniques."


The series will now move to Newcastle at the Raymond Terrace circuit in New South Wales for round three on April 10th.