Lorenzo And Spies Complete First Day Of Practice At Jerez 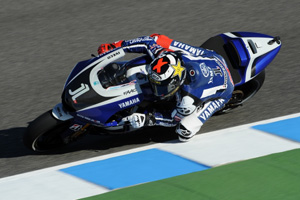 Round two of the 2011 MotoGP Championship got underway at Jerez today with Yamaha Factory Racing riders Jorge Lorenzo and Ben Spies getting their first European track time of the season.


Reigning World Champion Lorenzo spent the two free practice sessions testing a new set up for the circuit, improving from the mornings fifth place finish to wrap up the afternoons final session in third, 0.522 seconds from the front. The combined times placed him fifth today ahead of tomorrows qualifying heat.


Jorges teammate Spies spent the two sessions working on different set ups between bikes, focusing on front end feel and differing electronic set ups. The Texan finished in seventh place for both sessions, unable to improve on his morning time of 140.887 in the afternoon as a windier session slowed all riders a little. Both Spies and Lorenzo will start tomorrow looking to find a set up that delivers better traction for the fast corners and rapid direction changes of the circuit.

This morning the track was perfect with no wind but in the afternoon it came so the riding was more difficult. Finally we finished third, the gap to the front is less than before and we hope to improve the bike more for tomorrow. After the good race at Qatar we are more motivated and this is one of the special rounds of the year so we hope to have a great race on Sunday.

Its not been the best day today, I'm not very happy. We need to make some changes and I'm confident we can improve. Having said that, the feeling I'm having with the bike right now with the speed were doing is not too bad. I'm not feeling very comfortable with how the bike is handling but its only Friday. We have tomorrow and we have Sunday morning and I'm confident we can get the bike working better. I think this track can be good for the M1, we just need to change the setting and see how tomorrow goes. Well work on it and come back in the morning and go faster.

Jorge finished in third position this afternoon finally and which was an ok result. We need to do more work for sure to make the next step up so we are not happy with it. We have a couple of ideas we want to try, especially for traction and turnability, both areas where we need to improve for tomorrows qualifying session.

On Bens side of the garage we are still trying to find the best bike set up, we tried some different solutions but after two practice sessions we are still not satisfied. We are going to check the data from both of his bikes and see what solutions we can try tomorrow morning to see if they will work and help him improve. Jorge had a better session this afternoon and moved closer to the front guys, the team are still not satisfied though and need to make another step forward. I'm confident that both sides can make the necessary changes to give our riders the best opportunity in tomorrows qualifying.

The Monster Yamaha Tech 3 Team kicked off the European phase of the 2011 MotoGP World Championship in Jerez today, with Colin Edwards and Cal Crutchlow both posting competitive times on the opening day of practice. â€¨â€¨

In warm but windy conditions at the 2.748 miles circuit, Edwards set a best time of 1.41.063 to finish tenth overall on combined times.


Edwards continued his excellent start to 2011 in this morning's opening practice session, the experienced American once again the leading non-factory rider in eighth position as he concentrated on refining the set-up of his YZR-M1 machine to gain more turning performance.


Today presented Crutchlow with his first opportunity to acquaint himself with the challenging Jerez circuit. The British rider applied himself to the task with typical determination and enthusiasm and he posted a best lap of 1.41.854 to finish 15th on the timesheets.


Despite his minimal experience of the Jerez circuit, the 2009 World Supersport champion was able to demonstrate his undoubted potential by lapping faster than circuit specialists Hector Barbera and Toni Elias for the majority of the morning and afternoon session. He was one of only seven riders to lap faster in hotter conditions this afternoon and is confident overnight set-up tweaks will help him take another step forward tomorrow.


Jerez kicks off the long-awaited European leg of the 2011 MotoGP World Championship with a large and partisan crowd of over 100,000 expected to flock to the AndalucÃ­a venue.

We tried a bit of an experimental set-up with one bike we thought would work to help with the turning performance but it didn't quite give us the result we were anticipating. It worked in some areas but it created some other issues, so we'll go back to more of a similar set-up to what we ran in Qatar for tomorrow and we know that works. I was actually faster using the different setting but I just don't feel I can run that pace consistently over a race distance. What made it really difficult today was the wind. It was really gusting hard in some places, so you just had to be pretty careful because it was easy to get caught out. You just had to pay attention and get a feel for which way the wind was blowing because at least it was consistent in one direction."

I felt like I learned the circuit pretty quickly and I was happy with my performance this morning. But this afternoon I didn't really make the improvement I was looking for and that was a lot to do with the track temperature being much higher. You only have to look at the times of the fast guys to see the hotter conditions made it hard because nobody in the top seven was faster this afternoon. I was a little bit quicker, so I've improved and gained some time, but I needed to make a bigger jump than I did. With the track temperature a lot higher it made the bike feel quite a bit different compared to this morning. I'm sure I can improve the front-end feel because the wind was so strong it was blowing me off line. The front needs to be more planted so we've got some ideas to improve tomorrow. Considering my lack of experience at this track, I'm satisfied because the times are pretty close and I know we can improve.