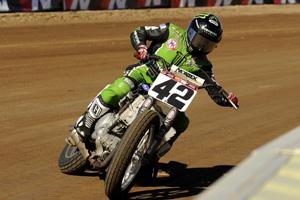 AMA Pro Flat Track Grand National Championship competitor Bryan Smith has announced that he was unable to work out a deal with his team, Monster Energy Kawasaki, for the upcoming 2011 season, and thus will compete in the series as a solo racer.

The 27-year-old racer has cut ties with the Kawasaki team after a relatively successful 2010 season. Smith cemented his status in the record books for 2010 when he was able to earn Kawasaki their first two wins in the GNC Twins class. Despite this success, Smith was only able to attain eighth overall in the final points standings.

After an offseason of negotiations, it appears Smith won't be on Team Green for the upcoming season. Instead, Smith has found a sponsor in motocross legend Pat Moroney and American Harley-Davidson, who will be supporting him throughout the 2011 campaign. Smith will be back on a Harley XR-750, a bike he has found success with in the past.

"I would like to take this opportunity to thank the Werner Springsteen Team, Monster Energy and Kawasaki for giving me the opportunity to race with them," Smith said. "I have gained a tremendous amount from my experience, and I will always cherish putting Kawasaki in the record books."