Hopkins To Fill In For Injured Bautista 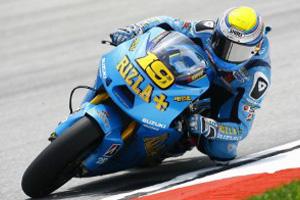 In what should be a blast from the past for longtime fans of MotoGP, American rider John Hopkins will be racing for Rizla Suzuki again - although only on a temporary basis.

Hopkins competed in MotoGP from 2002-2008, but eventually decided to move on to other series after some poor performances toward the end. While racing in MotoGP, he was perhaps best known as a member of the Rizla Suzuki team, where he had his best season, finishing fourth overall in 2007.

Now, with regular Suzuki rider Alvaro Bautista injured after the first race in Qatar, Hopkins will fill in for the racer this weekend in Jerez, Spain. Bautista, who underwent surgery after breaking his left femur, will reportedly be in attendance to cheer Hopkins on.

"I was shocked by what happened to Alvaro, especially after such good winter testing, and I really wish him a speedy and full recovery," Hopkins said in a statement. "I wanted the opportunity to get back on a MotoGP bike, but not under these circumstances."

Hopkins suffered a major injury himself last season in the World Superbike Championship that nearly ended his career. The American racer says that he has not been on a MotoGP bike in some time and realizes that it will be a challenge, but hopes to put on a good showing.