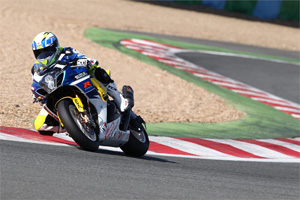 World Endurance Champions Suzuki Endurance Racing Team will defend its title in 2011 with a permanent team in the six-round Championship that gets underway next month at Magny Cours in France.


The French squad, who won the 2010 title despite not competing in all rounds, will comprise long-standing member Vincent Philippe, Freddy Foray, Japanese regular Daisaku Sakai and newcomer Anthony Delhalle on the new Suzuki GSX-R1000.


For Team Manager Dominique Meliand, this will be his 31st season in WEC and a passionate career that has seen him and SERT collect 10 World Endurance titles.


A total of 53 teams are entered for the opening round - the 75th running of the Bol d'Or - and SERT's main rivals will be the 2009 World Champions, the Monster Yamaha (YART) team of Igor Jerman, Steve Martin and Gwen Giabbani, plus 2004 Champions Yamaha Racing France riders David Checa, Kenny Foray and former SERT rider Matthew Lagrive.


Suzuki will also be in contention for Superstock glory as the Qatar Endurance Racing Team - FIM World Cup winners for the past three years - aim to put their GSX-R1000 on the top of the podium.