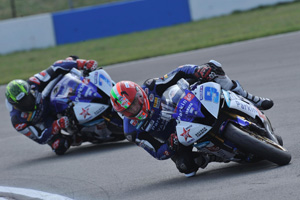 Luca Scassa and Chaz Davies provided an impressive performance to deliver the first one two race win of the 2011 World Supersport Championship for the Yamaha ParkinGO Team. Scassa delivered his second victory of the season on his 2009 winning YZF-R6 in Donington Park this afternoon, while fellow teammate Chaz Davies took his first WSS podium. The cold air and track temperatures proved no obstacle for the two ParkinGO riders as they got off to perfect starts and continued to dominate the race. Scassa got straight down to business from pole position, putting in a series of consistent laps and proceeding to lead the second race of the season from the start, looking to add to his Phillip Island victory.


Teammate and Brit Chaz Davies put in an equally strong performance. After a perfect start, Davies sat comfortably behind Scassa for the majority of the race, closing in on him with just a few laps to go to battle for first. Settling for second, Davies gained a well-deserved first podium position of the season on his home track, making up for for the less than perfect race result in Phillip Island last month.


The two Yamaha ParkinGO Team riders crossed the chequered flag with a gap of over 20 seconds ahead of Gino Rea in third. Scassa now heads to the third round of the World Supersport Championship in Assen leading the classification with 50 points while Davies holds 20 points in fifth position.

"I didn't expect Chaz to be quite so strong going by this morning's warm up times but he really surprised me with such an impressive performance. I had a perfect start off the grid. I would have settled for second but obviously was much happier with a win. We have won two races out of two and that's impressive. I'm very satisfied with my bike and team. We are proving to have the best overall package so I'm extremely pleased with this."

"A One Two win for the team is an amazing result. This shows how strong the package is. With four laps to go I closed in on Luca and tried to get the nose in wherever I could but he was so consistently strong everywhere that it was difficult to pin him at any one point. I had a stab at passing him on the last lap but didn't succeed. I envisioned two blue bikes on the ground and that's certainly not what we wanted. I want to thank Yamaha and all my team who have worked very hard to make up for the disappointing race in Phillip Island. "

"We are very happy with the outcome of today's race. It's the second race of the season and also the second win for the team. Having our two riders taking first and second is extraordinary. I'm pretty sure we could have gotten this result in Phillip Island but Chaz experienced rear tyre problems. He certainly showed his true potential today. I'm confident that this will be a very positive championship for us."