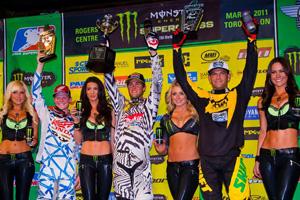 Ryan Dungey was finally able to capture his first win of the AMA Supercross season in a Toronto race that may eventually be looked back on as one of the year's most significant.


Dungey won the championship in his rookie season last year and was considered to be the favorite going into this year's competition. Dungey has gotten on the podium several times and is usually within the top five, but hasn't been able to put it all together and win a race - until now.


The holeshot went to the Frenchman Fabien Izoird, although Dungey was on his heels from the get-go, eventually passing him on the second lap. From there it was all Dungey, building up an insurmountable lead and snagging his first victory.


Meanwhile, it was more bad news for Ryan Villopoto, who was the points leader coming into the race. Villopoto looked to be running away with the title early in the season, but a crash last week in qualifying meant he missed the race completely. He made the final this time, but crashed and couldn't fully recover, finishing ninth.


That means there's a new points leader in Chad Reed, whose second-place finish allowed him to push past Villopoto in the standings by three points. Dungey's win combined with his solid racing all season allowed him to close the gap on Villopoto as well, as he now sits five points back of the Kawasaki rider at third overall.