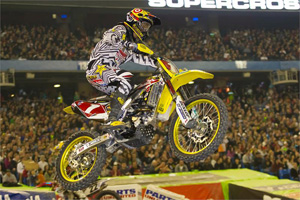 Team Rockstar Makita Suzuki's Ryan Dungey raced to his first victory of the 2011 AMA/ FIM World Supercross series at Rogers Centre in Toronto, Canada on Saturday night - and moved up to third place in the Championship.

Dungey rode strong all day, scoring the fourth best time in the afternoon qualifying and picking up a second-place finish in his heat race. In the Main Event, his Suzuki powered him out of the gate and into second place through the first turn. Dungey easily made his way to the front by the end of the first lap, which is where he stayed throughout the entire 20-lap race. His RM-Z450 performed flawlessly as Dungey threw down 20 strong laps on his way to a convincing first victory of the season.

"We had a great day today," said Dungey. "My Rockstar Makita Suzuki team did a great job setting my bike up for this track and I felt really comfortable all day. I knew going into the Main that a holeshot was 'gonna be key. I got a good start and ended up second and was able to work my RM-Z into the lead in the first lap. From there, I tried to put down the laps as best as I could - I tried to focus on my own race and not behind me. It was cool to be able to come around and get this first win. I'm very thankful. I couldn't have done it without the help and support of my whole Rockstar Makita Suzuki team and my family. I'm really looking forward to Dallas. I was able to get a win there last year and it's a great stadium; it's new and big. The fans there are great and it's always a good race." 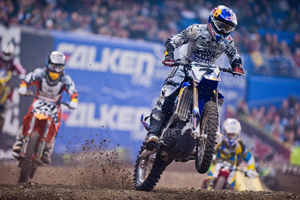 The trek to Toronto and the Rogers Centre for the twelfth round of seventeen in the AMA Supercross series (also an FIM World Championship) saw James Stewart and Justin Brayton place their YZ450Fs into the top five of the Main Event in front of more than 45,000 spectators.


San Manuel Yamaha's Stewart was hoping for his third victory across the border in what was only the fourth visit of the AMA competition to Toronto. Sadly the Floridian's hopes were dashed in yet another frantic first corner in which he hit the dirt. A chase back to fight with Ryan Villopoto ended in another collision between the pair but Stewart recovered and completed the rest of the twenty-minute dash impressively recovering positions to 4th.


"I'm just making way too many mistakes," admitted Stewart, whose DNF last week in Jacksonville was only the fifth time from 71 starts that he had finished outside of the top ten. "I'm making it hard on myself, but in the end I wanted to be smart and take what I could get this week, so I didn't push too hard to chase the guys up front. There are still five rounds left, and that's a lot of racing."


Brayton was 5th and almost six seconds ahead of yet another Yamaha rider with Nick Wey posting his best finish of the season to-date in 6th. Ryan Sipes was leading the Lites main event on his YZ250F but was hit by Blake Wharton and crashed. The Star Racing man was able to remount and collect 5th and remains 3rd in the East Coast points table.


With visits to Arlington, St Louis, Seattle, Salt Lake City and Las Vegas to come Stewart is still 4th in the standings but only 20 points behind new leader Chad Reed. Brayton is 7th and David Millsaps 9th. Round thirteen takes place next Saturday at the Cowboys Stadium in Texas. 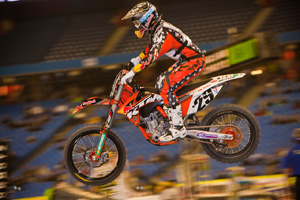 Red Bull/KTM Factory Team rider Andrew Short made the best of what could have been a disastrous weekend with a come from behind climb through the pack to earn 7th overall at the twelfth round of the AMA Supercross Series in Toronto, Canada.


Short had unfortunate luck in his heat when he suffered a mechanical problem and was forced to withdraw from the race and head to the last chance qualifier. His teammate, Mike Alessi came from a bad start in the same heat to move into the final qualifying position to earn a spot on the main event gate.


"I was nervous heading to the LCQ because I haven't been to one since 2008," commented Short. "But it went well and I got a good start from the outside, made some safe passes to move into the lead and took the win to get my Red Bull/KTM into the main event." 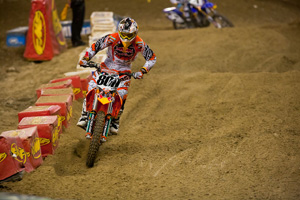 Both Red Bull/KTM Team riders earned phenomenal starts last weekend and were hoping to do the same at the start of the Toronto race but luck wouldn't have it. Short had to move in from the way outside and got pushed off the track just as he was cutting inside while Alessi missed the turn and had some issues of his own. Both riders got their momentum back and hurried to regain positions. Alessi was marked down a lap as a result of the first turn mishap while Short started the first lap in 17th and crossed the finish line jump of the same lap three spots forward in 14th. Unfortunately, a few laps into the race Alessi encountered another set back when he suffered a mechanical problem and did not finish the race. Short continued to solider on for the team and moved his KTM 350 SX-F quickly through the pack.


The majority of Short's passes were made in the first few laps. He began the race at the tail end of a seven rider train and had moved quickly by the riders and into a top ten position by the halfway point. Sticking close by was Kevin Windham who plowed through the bottom half of the riders with Short until it was just the two of them battling for what was now 7th position. Short led their battle through the laps and eventually pulled Windham on the final laps of the race to secure the position.


"I am pretty happy with my ride tonight. Whenever you have a bad start you never know how bad the race can turn out. I am really happy that I moved up inside the top ten and was able to salvage some much needed points," stated Short after the race.


The riders will return home for the week before heading back to Short's home state of Texas for the thirteenth round next weekend at the Cowboy Stadium in Dallas. 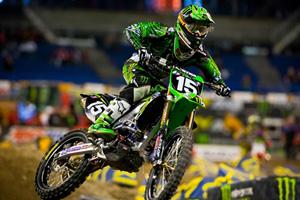 Wilson Closes in on Barcia After Lites East Win

The AMA Supercross Lites East held a thrilling race over the weekend in Toronto, as Dean Wilson chipped away at Justin Barcia's overall lead in the standing.


Wilson wasn't anywhere near the front in the opening laps of the race, as it was Barcia and his teammate Blake Wharton out in front early. It appeared that the duo would be challenged by Ryan Sipes, as the Yamaha rider made a strong run to take the lead. However, the three riders ended up too close too each other going into a sharp turn, and Sipes was driven off the track, with Barcia and Wharton momentarily slowed.


Barcia eventually had sole possession of the lead when Wilson began to make his move, finally overtaking the Honda rider on the eight lap. Wilson didn't relinquish the top spot from that point forward.


"The track was really tricky tonight," Wilson told Cycle News. "I didn't get the greatest of starts but I kept pushing forward. It was all I could do. [This win] means a lot to me. We still have three races to go and I'm still far back in the points, but I'll try my [best.]"


The win allowed Wilson to close the gap a bit on Barcia, who finished second. However, Barcia still has a sixteen-point lead, meaning he should have a relatively easy road to the championship as long as no disasters occur. 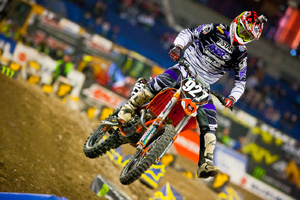 
Larsen had a decent start to his day turning the 10th fastest lap time in timed practice. His qualifying time earned him the fifth gate pick at the start of the first Lites heat. Larsen got pushed around on the start of his heat and came from around 10th to 6th within a few laps. He maintained that position through the checkers to qualify into the main event.


At the start of the main event, Larsen grabbed a good jump off the line and came around the inside of the turn well inside the top ten. As they entered the sand straight, Blake Baggett got cross-rutted and cut into Larsen's line costing the KTM rider a few positions. Larsen managed to stay on course and sat in 9th place. By the end of the first lap, Larsen passed two riders to move into 7th place. He continued to move forward on the next lap passing Hunter Hewitt. On the third lap he capitalized on Malcolm Stewart's crash and on the fourth lap moved around the downed bike of Lance Vincent. Now sitting in 4th position, Larsen put his focus on riding consistent to finish the race and earn his season best finish.


"I was able to finally get a decent result because I rode a consistent race the whole main event and didn't make any mistakes. I wish I had a better start in the beginning so I could have ran closer to the front of the pack. They had pulled so far out by the time I secured 4th it was hard to play catch up," commented Larsen. "Overall I am very excited about this race. This is the best Supercross finish I have had in my career. Since making the switch to KTM, I have continued to improve upon my top finishes and am glad to get another one for myself and the team today." 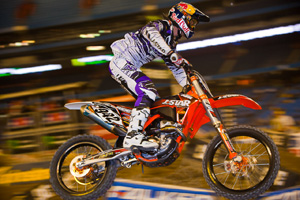 Larsen's teammate, Tye Simmonds, improved upon his results from the Jacksonville Supercross with a much better showing in Toronto. After not qualifying after a bad crash in his heat at last week's Supercross race, Simmonds was excited to easily qualify to the main event this weekend with an 8th place finish in the second Supercross heat.


In the main event, Simmonds started around 16th. Throughout the twenty lap main event, he remained consistent in that position. At one point he moved as high up as 13th before eventually settling into 15th for the night. "I am definitely still off the pace of where I would like to be at this point in the season. But this is my first year ever racing Supercross and I am learning more each week. I am happy to be near the tail end of the season without injury and also qualifying much easier into the mains than at the start of my season," stated Simmonds.