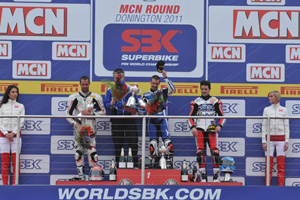 Spectacular First Race Victory for Marco Melandri Yamaha World Superbike rider Marco Melandri provided an extraordinary performance today in Donington Park delivering his first race victory and second podium of the 2011 season. Melandri got straight down to business in race one, working his way through the pack to secure a well-deserved first win of his WSBK career. With a less than perfect third row and ninth position start off the grid, he skillfully closed in on his adversaries, taking him into second position by lap 17. He overtook Jakob Smrz to take the lead with just two laps to go to the chequered flag. Melandri proved to be just as determined and consistent in race two, moving up to third just five laps into the race and proceeding to battle his way through for second on the podium.


Fellow Teammate Eugene Laverty was less fortunate in race one however and suffered a significant crash on turn eight of the fourth lap. Laverty was able to jump back on his bike in race two and complete the race in the points.


Marco Melandri heads to round three of the 2011 WSBK Championship in Assen second on the overall standings with 72 points, just 19 points behind Carlos Checa. Teammate Laverty holds 16 points and is in 12th position. Yamaha are currently second in the Manufacturers standings with a total of 74 points.

"I had a great win in race one. I was just behind a very aggressive bunch of riders so I had to work hard to keep my rhythm and push through. I managed to close in on Smrz with five laps to go and take my first win. Race two was a little more difficult. I was suffering from a head cold and lost concentration a little mid way. I am very pleased to be on the podium again. We have been working very hard in preparation for today's races and we did very well, I had a lot of fun and I think we proved that we have a very good package. I'm looking forward to the rest of the season. Thanks to Yamaha, my team and my sponsors."

"Not a good day today. The race one crash was bizarre; I don't really know what happened. I almost crashed in the corner before and lost a little bit of confidence afterwards. Race two started well but I had to push really hard. We still haven't found the right settings for me; we need to fine tune to suit my riding style. I know I've got potential, so do the bike and the team, we just need to work hard to combine it all. "

"This was a fantastic result for Marco, he provided a very impressive first race. He proved yet again to be a very talented rider, overtaking the pack from so far back and winning. I've always been sure that we have a competitive package and today Marco confirmed this. He had to push very hard in race two and had difficulty closing in on Checa. We need to improve on qualifying results in order to get a better position on the grid and avoid the handicap of starting so far back. We decided to keep exactly the same set up and tyre choice between the two races, the decision clearly paid off.

I'm extremely sorry for Eugene. He suffered quite a bad crash in race one but thankfully was not hurt. He had difficulty delivering the results we'd hoped for in race two, I believe he has a lot of potential and can be much faster. We need to work hard with him in order demonstrate what he's made of. Overall it was very difficult to race in such extreme weather conditions as in race one. I'm looking forward to Assen where I strongly believe we can show how competitive the bike is and have both our riders in the top where they they should be." 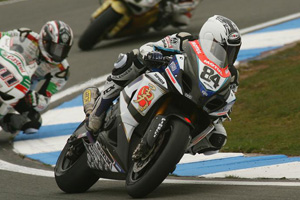 Fabrizio Fights Back to Seventh

After being forced to DNF in the first race at today's World Superbike Championship second round at Donington, Team Suzuki Alstare rider Michel Fabrizio came back with a gritty performance in the second 23 lapper to finish in seventh position.


If it had not have been for a third-row grid position and a poor start, Fabrizio would've been able to challenge for third spot, but the Italian was at least able to enjoy the race - unlike race one: In that, a slide going into Coppice corner forced the Italian into the gravel, but fortunately he was able to keep the bike upright and saved a crash. He got the bike back to the pits, where the team changed the rear tyre from a hard to a medium. His opening laps on the new tyre was a good one, but by lap three there was no grip at all, and seeing he was having difficulty controlling the bike - and also did not want to crash - he pulled out of the race.


The conditions at the British venue - that witnessed a total crowd of 51,000 over the weekend - were almost as poor as Saturday's Qualifying and Superpole, with temperatures mostly sub-six Degrees.

"Today was a bit mixed, but I was happy with my performance in race two and I really enjoyed all the fights I had in that one. It's just a shame about the first race. I'm not exactly sure what happened. All I know was that suddenly I had no rear grip at all going into Coppice. I went into the gravel, but managed not to crash. I thought there was something wrong with the rear tyre, so I pitted and changed the rear to a medium. My first lap was in the 1:30s and the second was pretty good also, but the third was way off the pace. From then, it got worse. I was dead last with no chance of catching anybody and, because I didn't feel safe carrying on, I pulled into the pits. When we looked at the rear tyre, it was completely destroyed.

"I didn't make the best of starts in race two and when you are on the third row of the grid, good starts are needed. I was 14th at the end of the first lap and then I began to fight my way up. I improved my position lap-by-lap and had some great battles with Xaus, Biaggi, Corser and Smrz. At the end, Rea was not far ahead of me and I thought I could catch him, but I ran out of laps and finished seventh, which is not so bad from the third row of the grid. Who knows what might have happened if I had managed to get off the line better, but I was happy enough with my performance."