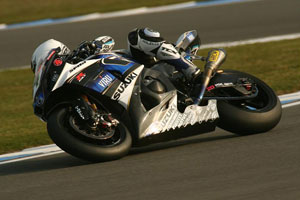 Team Suzuki Alstare rider Michel Fabrizio escaped serious injury when he was hit behind and crashed during second qualifying for Sunday's second-round World Superbike Championship round at Donington Park in Great Britain.


The Italian - who had put up a strong performance in the morning session on his GSX-R1000- was classified 17th, but is upbeat and ready for tomorrow's Qualifying and Superpole.


Surprisingly-warm conditions of 16 degrees saw the circuit blessed in sunshine for most of the day as reigning champion Max Biaggi (Aprilia) set the fastest lap ahead of Marco Melandri (Yamaha) and series leader Carlos Checa (Ducati) third.


"The new section of the track, at the Fogarty Esses, has made the lap times faster and the track is a bit more flowing now. It's quite a technical track and it's vital to have a good set-up if you want to lap quickly. It's the kind of track where, if you mess up one corner, you're going to mess up the whole lap.


"Today I struggled a bit with rear grip, but part of the problem was that we had some new forks to try and quite a few adjustments to make. I think that they are an improvement, so now we'll have to work on them and improve the feeling. This is normal work, but something that just has to be done.


"In the qualifying session this afternoon, I got hit from behind and crashed and was lucky to escape injury. I feel sorry for my mechanics because they have a lot of work to do to repair the damage and replace a lot of parts."