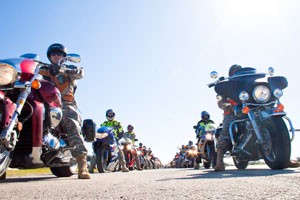 
"We've come so far during just the past five years, bringing motorcycle safety to the forefront," Vela said before the bikes were fired up March 10, on Sadowski Field, near III Corps Headquarters. "Here at Fort Hood we set the standard for the Army to follow in our motorcycle mentorship program."


Since they were implemented about three years ago by then-commander Lt. Gen. Rick Lynch, who kicked the movement off in 2008 with a 1,200-motorcycle ride called "Phantom Thunder," the post's motorcycle safety programs and related safety rides have become the Army's "gold standard" according to Brig. Gen. William T. Wolf, the director of Army Safety who recently toured Fort Hood's Motorcycle Training Facility on West Fort Hood.

Vela said the timing of the ride was no coincidence. 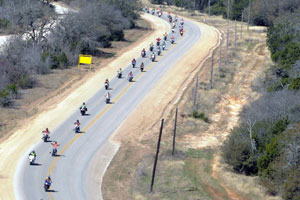 "We're about to go on spring break and, with gas prices high, right now, a lot of people are thinking about hitting the road. At the end of the day, if we can save one guy from a motorcycle accident by being more visible and cautious, that's what it's all about."

"A lot of people get a bike, and they want to get something they saw in a magazine with a 1,300 cc motor or bigger, and they can't handle it. I suggest to my friends that they take these classes before they go out and ride," he said.

McConnell, who works on the weapons and electronic systems on Apache attack helicopters, was riding his first custom bike, a $13,000 project in progress on a 2007 Harley Davidson Soft Tail Deuce with modified exhausts and foot pegs machined from a 30-mil casing from an Apache. 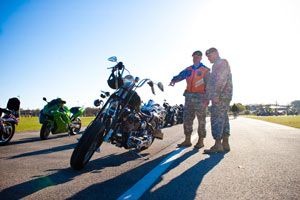 Addressing the riders, the installation's commanding general, Lt. Gen. Bob Cone, said he often is asked why he makes it so hard on people who want to ride a motorcycle at Fort Hood.

"We've lost 30 Soldiers at Fort Hood since 2007, killed on motorcycles," the general explained, "so we as leaders are going to take care of younger Soldiers who want to get on motorcycles to make sure they have all the skills and techniques and abilities necessary so they don't become another casualty or statistic."

Although the number of active-duty Soldiers stationed on post who have died in motorcycle accidents has declined for three consecutive years, Cone said, "We lost a Solider already this year."

While the general is not a biker, he said some of the best Soldiers he's known in his 32 years in the service have ridden motorcycles. 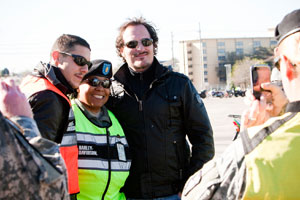 "There's something about motorcycles and being a warrior. These two things are akin," he said.

One of those two-wheeled warriors, Sgt. 1st Class Richard Glovas, Fox Company, 1st Battalion, 8th Cavalry Regiment, 1st Cavalry Division, was a mentor for the ride, which wound from Fort Hood down East Range Road to the Belton Lake Outdoor Recreation Area and back to Sadowski Field, where an after-ride briefing was held.

Glovas started riding bikes as a 5 year old. He and friends rode through the hills and wooded lots surrounding Rathbun, Iowa.

"We didn't do any racing, just what young, dumb guys do. I'm trying to prevent a lot of that from happening now," he added.

Glovas rode a 2009 Harley Davidson Night Train with a 96 cubic-inch motor. He's been riding Harleys for 20 years, he added, "Because they're made in the USA."

The H-D brand was a common bond for many riders. Vela mounted up on an Electra-Glide. But freedom and getting away from it all also were mentioned.

"For me, it's a stress relief. For one thing," Vela said, "you have to concentrate on what you're doing. You can't daydream while you're riding a motorcycle. The Army, we have our rules and regs. But for me, it gives you that free spirit, being out in the wind. It's calming."

Vela met Coates and Rossi last year when they were touring Camp Taji in Iraq. They plan to visit the troops again after filming for the TV series ends this year. 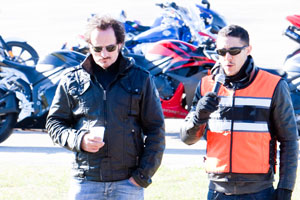 "We had a great time (in Iraq), and can't wait to go back. We support everything you guys do and we take our hats off to you. Thanks you so much. Be safe downrange and come back," Coates said.

Coates was riding what he described as a "big-ass Harley bagger." Rossi was riding a 2003 H-D Night Train.

Although it's more difficult to relax in Los Angeles traffic, Rossi said, he enjoys riding motorcycles because "It's quiet time. I get away
from all the madness of cell phones and girlfriends. So it's just me and the road. It's one of the few times in the chaotic environment we live in that you can find peace."

Another rider, 1st Sgt. Alonzo Taylor, Division Headquarters and Headquarter Battalion, 1st Cav. Div., has attended all of the basic and
advanced motorcycle mentorship courses, but he also relies on another form of protection while riding his 2007 Harley Davidson V-Rod.

Sewn into his reflective vest is the phrase "Never ride faster than your angels can fly."

Although his motorcycle is capable of speeds up to 140 mph, Taylor said, he's never pegged the speedometer.

"My angels tell me that's too fast, and you'd better slow down."