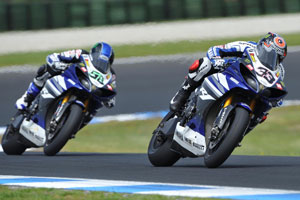 Yamaha World Superbike Team riders Marco Melandri and Eugene Laverty head to Donington this weekend for round two of the 2011 World Superbike Championship. After a month's break from the opening round in Phillip Island both riders are keen to get back onboard their YZF-R1 race bikes and pick up where they left off. Both Melandri and Laverty have still relatively little time in the seat of the R1 but nevertheless impressed at the opening round in Australia. The Italian Superbike Rookie Melandri delivered his maiden podium for the championship in race two, giving the reigning world champion Max Biaggi no rest all the way to the line. Laverty, also a Superbike Rookie, was looking as promising as his teammate, leading race one for a period; race two saw multiple ghost neutrals hiding his true potential. Melandri visited his doctor on Monday this week, and was given the all clear for a healthy shoulder. â€¨â€¨As they set up in the UK for the second round of the championship, they do so with Melandri sitting in third in the overall standings with 27 points, his teammate Laverty sits in ninth with 14 points, 13 behind Melandri.

It's been two years since our last race here with Ben Spies but we will start with the same setting from last Phillip Island's race and see which direction Marco wants to go in. We will start with the second solution we found in Australia from race two with more traction in the rear and we develop from there. Of course we will also use a different gearbox as we did with Ben. The Donington track has changed a little since our last visit and Marco is a lot lighter than Ben so we have to adjust the settings to take this into account.

We sacrificed a lot on set up for Phillip Island as it's notorious on tyre life. We will be going back to a more basic setting for Donington that we used in Magny Cours and Portimao for testing. This should make the bike more neutral for handling and braking which you need for Donington. There will be no major changes as the base is really good, the focus will be on letting Eugene do some more laps to learn the Yamaha a bit more.

I'm feeling good and very happy to be getting back on my bike this weekend, one month with no riding seems very long. Donington has always been a good track for me, I had good races there in MotoGP and I think our bike will work well. My only concern is the weather, I'm hoping for some sunshine as I still haven't had much experience on the Pirelli wet tyres.

I'm pretty excited for Donington. After Phillip Island it's looking very promising, we showed a lot of potential there. We'll wait and see what the results are come Sunday but I'm quietly confident, I think we are going to be very strong. I like Donington a lot, especially the fast flowing nature of the track and I've always enjoyed riding it.

After the good start to the season in Phillip Island we're glad to be back in Europe, on this historical race track. Donington Park is an important race for us where we want to confirm how competitive our package is. Our engineers have been working hard in the last weeks in order to offer both riders the best starting set up for the British track. Eugene and Marco haven't stopped training so I'm confident that they will be able to perform well on what could be considered the 'home track' for both: Eugene, coming from these Islands but Marco also used to live close to the Donington circuit. We're hoping for good weather and that all fans will enjoy the races.

Yamaha ParkinGO Team riders Luca Scassa and Chas Davies arrive in Donington with purpose having put on an impressive performance at the opening round of the 2011 World Supersport Championship in Phillip Island last month. Scassa delivered a sensational race victory, using the 2009 World Supersport Championship winning R6 to its full potential to snatch the chequered flag on his first race with the bike. As a result the Italian rider arrives in Donington as the championship leader, looking to defend his position, and hoping to replicate the success of Cal Crutchlow who took the R6 to victory in Donington at its previous visit in 2009 on his way to the championship title.


Scassa's teammate Davies had been on track to share the podium having started strongly however he was one of a number of riders suffering from punctured tyres during the inaugural race. Davies will be keen to make amends for this and gain his first championship points of the 2011 season in front of his home crowd at Donington.