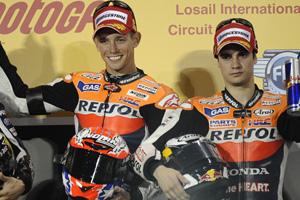 All through the MotoGP preseason, Casey Stoner and the Repsol Honda team have been dominating tests and practices with top performance after top performance. On Sunday, Stoner and his team proved that the hype was worth it.

Stoner came out on top in a competitive race at Qatar, besting defending champion Jorge Lorenzo by more than three seconds. While the final standings would seem to indicate that Stoner once again dominated, it wasn't a wire-to-wire victory for the Australian rider.

Lorenzo actually looked the best out of the gate, and Stoner's teammate Dani Pedrosa also kept things competitive. Stoner, however, was eventually able to overtake Lorenzo and increase his lead as the race went on.

The more interesting battle was between Lorenzo and Pedrosa, as the two riders dueled for second place. Lorenzo was eventually able to cement his position on the 19th lap of the race, but the bad news is that a recurring injury may have prevented Pedrosa from making his move. Cycle News reports that the rider had a flare-up of pain in his last arm, a problem that plagued him in the last two races of the previous season.

Overall, the track seems to have been made for Honda, as Lorenzo was the only non-Honda rider to crack the top five, as Andre Dovizioso and Marco Simoncelli placed fourth and fifth, respectively.