Ben Spies And Jorge Lorenzo Start The Season In Qatar 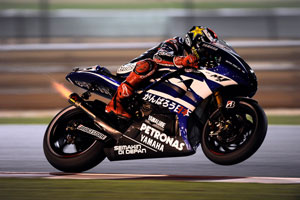 Yamaha Factory Racing riders Ben Spies and Jorge Lorenzo finally made a start to the 2011 MotoGP season tonight under the floodlights of the International Losail Circuit in Qatar. Tackling his first official race weekend practice as a factory rider, Spies spent his session on just one set of tyres which were not the best for the track. Despite this the American rider was consistently quick throughout the free practice, ending in confident mood ahead of tomorrow's second session in sixth place, just 0.131 seconds from second.


On the other side of the garage reigning World Champion Lorenzo had a more fruitful evening session, making big progress from his test here a few days ago. The crew went back to a tried and tested set up from 2010 which delivered more confidence for the young Mallorcan. The data from the free practice give him a clear direction to improve towards qualifying on Saturday night. Lorenzo ended the session in seventh place, just 0.093 seconds behind his team mate.


As a mark of support for those suffering following the disaster in Japan both Ben Spies and Jorge Lorenzo will carry the message "With You, Japan" in both English and Japanese on their M1's for the weekend.

"Everything went really smooth, we made two major changes to the bike, one was better, one wasn't. We spent the whole time on tyres we hope are the worst for the track, a front I don't like and a harder rear and we matched our time from the test. I'm happy that we've made the bike a bit better, if we go to what we think is better with the tyres we should have a few tenths."

"Today we used a set up from last year here, I feel much more used to it so I am a lot more happy. I think if we improve the setting some more tomorrow we can really step forward. With the new chassis I can make faster corner speed here so the 2011 chassis is working well. I think we will all be closer to the front on Sunday night."

"A very good practice for us, even when the position is not so good. The last test we did a long run and Jorge was not so happy with the set up and was a bit disappointed. Finally the improvement and changes we made today have resulted in a good test and a better feeling for him. This means he can now be consistent, that is his strong point. From now on we will be moving forwards."

"We had a good response on Ben's side, we used only one set of tyres during the session and it wasn't the optimum tyre so this gives us confidence. After two previous tests Jorge has now found a better set up which is promising for the weekend. All in all the team has made a good start and we are looking forward to making the next step tomorrow to get closer to our set up for the race."