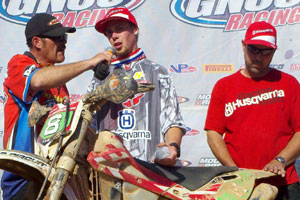 Another GNCC weekend, another podium finish for Fred Andrews Racing/Team Husqvarna's Jason Thomas as Round #2 of the 2011 Grand National Cross Country chase rolled into the Georgia woods. After having a devil of a time with the power-robbing sand of Florida at Round #1, the team was looking forward to tacky dirt and sunny 80-degree weather.


A solid second place start enabled XC2 Pro Class racer Jason Thomas to put his Husqvarna TXC250 into first place in class by the end of first lap. However a big second lap get off dropped him back to 4th place. "I crashed really hard," says Thomas. "I'm so sore right now!" However he was able to push through the pain and work his way up to another GNCC podium finish for the second race in a row. "I know I need to be on the podium at each race in order to win the championship." After his 3rd place in class and 10th overall on the day, Thomas is now third in the GNCC championship points standings.


Thomas' Husqvarna/FAR teammate Morgan Moss also had a top 10 start for the XC2 Pro race. He'd charged up to 5th place early on his Husqvarna TXC250 when disaster struck! "I was going good and had passed a few guys before I got stuck in a killer mud hole," Moss explains. "Unfortunately it took me so long to dig out (of the mud) that I just couldn't make up the time." Moss continued to push hard and logged some fast lap times, and managed to climb back to 13th in the XC2 Pro class and 30th overall (all classes scored) on the day. Combined with his 5th place finish at the season opener in Georgia, Moss currently sits in 8th in points in the XC2 Pro class.


Flying Finn Simo Kirssi had another tough weekend in the tight Georgia woods. Simo suffered a bad start, but he managed to work his Husqvarna TE310 dual-sport up to 11th place in the XC1 Pro class, 18th overall for the day. "I was good in the open portions of the course, but I am not accustomed to the really tight woods sections," admits the 2010 European Cross Country champ. "I will train more in the tight stuff for the next GNCC in North Carolina." Kirssi now sits in 17th place overall in the XC1 Pro standings.


After winning the first two times out on her new Hall's Husqvarna TXC250, both in a national enduro and the first GNCC race of 2011, Marvelous Mandi Mastin ran into a devil of challenge down in Georgia. When the smoke cleared from their heated two and a half hour/5-lap battle, Maria Fosberg had won the Women's class by less than 3 minutes over Mastin. A veteran ISDE racer and multi-time Enduro and GNCC overall champ, Mandi admits she needs to be on her game. "I didn't have the best day today," she says. "I made many mistakes and just felt 'off' all day... its been a long week with lots of riding. Now its time to go home, rest up and regroup." Even with an "off" day, Mastin's impressive 1-2 finishes still have her in a virtual tie for the GNCC Women's championship.


"It is particularly gratifying to see Husqvarna doing so well in GNCC competition this season," says Husqvarna's National Marketing Manager Corey Eastman. "We are looking forward to rewarding our winning racers with some of the $12 million in contingency... solid proof that it really does pay to 'Ride More' in 2011," says Eastman in reference to the company's Ride More message for this season.