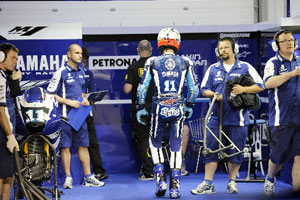 The biggest threat on the track this evening for Yamaha Factory Racing riders Jorge Lorenzo and Ben Spies was not other riders but fiercely strong winds blowing across the Losail circuit in Qatar. The final pre-season MotoGP test session before next weekend's opening race was a battle against the elements.


American rider Spies built steadily up the time sheets, slotting in as second fastest rider just before the midway point of the session. He took his last opportunity before the race weekend to work through some further geometry settings with Crew Chief Tom Houseworth as they hunted down extra grip on the track, wrapping up at the end in third 0.613 seconds from the front. Spies' team mate Lorenzo struggled to make a significant step forward from yesterday's session, hampered by the winds the Mallorcan was unable to find the best set up for the conditions. He finished the session with an extended run to check on fuel consumption, ending the final test of the winter off-season in seventh position on the time sheets.

"It's been a good test, I'm happy with it. We tried a few different things today and improved the bike some more. We've now got a couple of days to look over the data ready for the four day weekend, there'll be plenty more riding opportunities before Sunday. I was pretty confident coming here after Sepang, hopefully we can make the bike even better before the race. Last year we saw that the M1 worked well at every track, it's Yamaha's strong point and I think it's the same this year."

"Today wasn't the best day for me. It was not because my riding is bad, I always admit when it is, we struggled with the set up of the bike during the session and unfortunately we didn't make a step forward. The wind was tough but that was a problem for everyone. We also tried a different swing arm today but it didn't make an improvement. We will work over the next few days to be ready to improve in the next sessions on Thursday."

"Today was a very windy day in Qatar, compared to yesterday we struggled a little bit with the feeling and the balance of the bike because of it. We made a long run at the end even though we hadn't found a perfect feeling to see what our fuel consumption was and also gather some more electronic information. The bike set up wasn't perfect for it but it was necessary to do."

"We are satisfied with Ben's bike set up, he was consistently quite fast. Ben didn't push 100% which makes us confident for the race weekend. We didn't try a really long run but managed to maintain a consistent fast pace with a used tyre. We didn't make as big a step forward today on Jorge's side as we would have liked however we completed a useful longer run to gather some valuable data. We're confident that we have enough sessions before Sunday's race for both riders to find an optimum and competitive set up."