Lorenzo And Spies Set For 2011 MotoGP Season Opener At Qatar 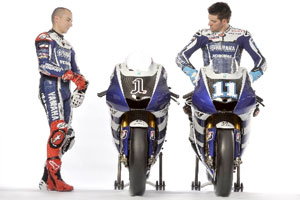 This weekend marks the end of a long winter of waiting as the hugely anticipated 2011 MotoGP season bursts into life on the floodlit Losail International Circuit in Qatar. Reigning MotoGP World Champion Jorge Lorenzo steps up to the grid to challenge for a second title at the controls of his YZR-M1 with nothing less than victory in his sights. Joining him in the garage and completing Yamaha Factory Racing's line up for this season will be 2010 MotoGP Rookie of the Year Ben Spies. â€¨â€¨

The 2010 season saw Lorenzo firmly cement his place as one of the Grand Prix elite. The 23 yr old Mallorcan stormed through the 18 round season to take an impressive nine race wins and a premier class record breaking 383 point tally on his way to title victory. The Yamaha Factory rider has started every MotoGP race in his premiership career at Qatar from the front row, t aking a pole position in his 2008 MotoGP debut and has always finished on the podium, although a race win has so far eluded him. â€¨â€¨

Spies, the Texan Factory newcomer, is no stranger to Yamaha having taken the Yamaha Factory Superbike to victory in the 2009 World Superbike Championship. He went on to impress in his debut season in MotoGP in 2010 on the Tech3 Yamaha M1, securing sixth in the championship standings as the highest placed non-factory rider, scoring two podiums and a dazzling pole position start for his home race at Indianapolis in the process.

The 2010 season opener at the Losail circuit saw the 25yr old push on from a fourth row grid start position to finish the race in fifth, just 3.9 seconds from the race winner. â€¨â€¨The pre-season winter testing has seen both riders perform strongly, posting impressive race pace as they set up their 2011 M1s for what will be the final year of the 800cc MotoGP class. The updated 800cc machi nes have made advances in grip level, stability and electronics to give Lorenzo and Spies the best possible weapons in their fight for the chequered flag.

"The new season is here and I'm very proud to be able to start it with the number one. Our bike has been better and better from the first test but there is still room for improvement. Winning the World Championship last year was a great achievement but everybody starts the same this weekend with no points and the competition is very tough. I have been training very hard over the winter to be ready and I am excited to start."

"It feels really good to be here as part of the Factory Team, we worked really hard last year to get here. I've got a great crew around me, I've worked with most of them before in different teams so it's almost like a reunion! Everything has gone really smoothly in the tests, I have to say I'm more of a racer than a tester so I'm pretty impatient now to get to it and see what we can do."

"We are now in the same position as we were here in Qatar last year, starting with zero championship points. Last season Jorge started injured and was recovering from his broken thumb so the pressure was not on him. Now he is World Champion and physically fit but his rivals have been extremely fast during the winter tests, so to me it means again he can start without the pressure from being the favourite!"

"This is a very exciting moment for Yamaha Factory Racing, we are starting this season at a special time marking the 50th Anniversary of Yamaha's involvement i n Grand Prix racing. We have two very strong riders, the reigning World Champion and the 2010 Rookie of the Year onboard so we have the potential to do very well. I am confident that come Sunday everybody will perform to their best. The competition this year is possibly the highest it has been in MotoGP for some time so it will be a tough season, however our expectations are high. Whilst we prepare for our first race, our thoughts and sympathies are also with those in Japan following the terrible recent tragedy."