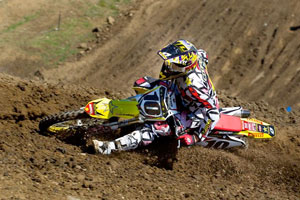 Team Rockstar Motul Suzuki's Pro Open challenger Cody Cooper conquered treacherous, muddy conditions at the first round of the Australian National Motocross Championship at Broadford to put his fuel-injected RM-Z450 on the box.

After a hot and humid qualifying session, dark clouds descended on the State Motorcycling Complex just as the gate dropped in Moto 1. A poor start saw Cooper relegated to mid pack, but he soon found his rhythm working his way up to seventh position by the chequered flag. With the torrential rain continuing to wreak havoc, Cooper struggled in Moto 2, suffering impaired vision and finishing in 14th place.

Tyre changes were allowed between Motos 2 and 3, which made an instant improvement to the Suzuki pilot's set up.

Moto 3 and 4 saw the New Zealander dominate, taking the lead early in both motos then checking out to win convincingly. Cooper's 7-14-1-1 finish was enough for second place overall and sets up a strong foundation for his assault on the 2011 championship.

The 21-year-old rookie looked set for the overall round win with a 4-1-2 result in the first three motos. Unfortunately a flat tyre in the final moto forced him to settle for 16th position and third place overall for the round. Bopping's result saw two RM-Z450s on the podium, with both Suzuki-mounted riders feeling confident heading into the second round.

In the Pro Lites class, Daniel McCoy put in a solid performance over the four Pro Lites motos.

Unlike the 450 races, the quarter litre title challengers battled under blue skies with McCoy carding a 6-13-6-7 result for seventh place overall. McCoy was hamstrung by poor starts but still showed the consistent speed that will have him challenging for race wins in 2011.

Team Rockstar Motul Suzuki Team Manager Jay Foreman, was happy with the weekend's results.  He said: "I am happy the team was able to record a solid points haul at this first round. We are in a lot better shape than this time last year, Cody's two race wins are great for his confidence and now that we have 12 months testing and set up behind us, I know that we have a good platform to challenge for this year's title. Dan rode well in his first national race on the RM-Z250. We need to spend some time working on his starts but I am confident that his results will improve from here."

The series will now move to Sydney at the Appin circuit in New South Wales for round two on April 3rd.