Buttrick Earns 4th At GNCC Round 2 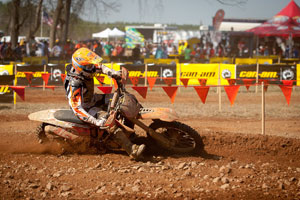 FMF/KTM Team rider Cory Buttrick earned 4th overall after a close 3-hour long battle for a top three spot at second round of the GNCC Series dubbed 'The General' in Aonia Pass, GA.

The conditions were perfect for racing at the second round of the season. The track was the perfect moisture in almost every section which left the course dust free. The worst portions of the track were a few mud holes along the trails.

WMR/KTM support rider Nathan Kanney grabbed the holeshot followed closely by FMF/KTM riders Charlie Mullins and Cory Buttrick. FMF/KTM rider Russell Bobbitt had the early jump and looked like he would secure the holeshot before crashing in the first turn and handing the award to Kanney. Bobbitt eventually recovered and spent the remainder of the race playing catch up. He worked his way into the top ten by the end of the race where he battled with long-time rival Mike Lafferty for 9th position. Bobbitt won the position and finished 9th overall for the day.

Out front, Kanney, Buttrick and Mullins battled with Paul Whibley, Thad Duvall and Josh Strang for the lead position. The top six riders stuck close together throughout the majority of the race swapping positions each lap. Kanney led for two of the seven laps before dropping to 5th at the end of the race. Buttrick had fallen to 6th place during the middle of the race after his pit before turning up the heat and picking off two riders before the end of the race to secure 4th overall topping his first round finish. Mullins came around the first lap in 3rd place before suffering a terrible crash on the second lap. "I hit the ground hard when I crashed and it shook me up a bit. It took me a while to get going and regroup," stated Mullins. At the end of seven laps, Mullins was able to move up to 6th where he finished for the day.

The final member of the FMF/KTM Team Kailub Russell had another spill of bad luck at this round. It started the night before the race when Russell came down with food poisoning which left him dehydrated the next day. Russell put his best effort in to try and salvage as many points as he could despite his condition. He ended up racing five of the seven laps before he retired from the race. "It was unfortunate that Kailub was sick. He was feeling pretty ill at the end of the race and we decided it was better to be safe and pull him off before the end of the race. We know he can be a podium contender and are looking forward to seeing him get a solid ride in at the next round," commented FMF/KTM Team Manager Antti Kallonen.

The XC2 class went very well for the KTM brand for the second weekend in a row. The class was won by KTM support rider Jesse Robinson. He was followed by KTM rider Steward Baylor who remains in the points lead. Baylor's younger brother, Grant Baylor, who is also a KTM rider, was awarded the top amateur award for the weekend after winning the 250 A class.

RPM/KTM rider and reigning Women's GNCC Champion, Maria Forsberg, put together an impressive ride to take the win in the Women's class and take over the points lead.