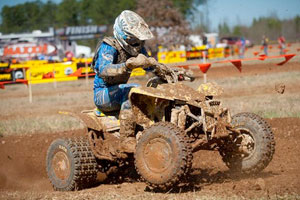 Rockstar Makita Suzuki's Chris Borich claimed his second win in as many weeks with a come-from-behind victory in the American Maxxis General GNCC - round two of the 2011 Can-Am Grand National Cross Series in Washington, Georgia.

The Rockstar Makita Suzuki rider ran second for most of the race after getting off the line in third, but turned up the wick on his Suzuki QuadRacer R450 to make a final lap to pass on early leader Chris Bithell, taking the lead and the win.


"That last lap - I knew it was going to be pretty much a free-for-all," Borich said of his battle with Bithell. "I pulled up alongside him a couple of times, but he had a wheel on me so I let him go. Then when we got to the motocross track, I went under him in one of the turns and took the lead on my Suzuki."


Borich, the reigning ATV XC1 champion, rode his Suzuki QuadRacer R450 to victory just last week in round one of the GNCC series, giving him a perfect record so far this season. With the two victories, Borich will carry a 14-point lead in the series standings into the third round of the series in Morganton, North Carolina on March 26th.