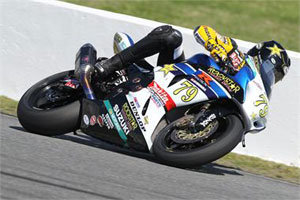 Team Rockstar Makita Suzuki celebrated a tremendous AMA Superbike opening-round weekend at Daytona International Speedway in Daytona Beach, Florida at the weekend, with Blake Young winning both races and team mate Tommy Hayden joining him on the podium in both events.


The weekend's first AMA Superbike race saw Young in a multi-rider battle for almost all 15 laps on the famed Daytona racecourse. When the dust had settled, however, Young took the win over his team mate by just .026 of a second. In the second race, Young was biding his time until the final lap when he stormed the front-runner and took the lead along with his second victory of the weekend.


"Today was great," enthused Young. "The only thing we could have done better was to lead more laps and get that pole position. Coming out of here with two wins, I'm ecstatic. I haven't had the best of luck at Daytona before: Last year we had a fifth and a seventh, so this year is definitely a positive. But it's a long season, and Daytona is just one of the races. We just need to chalk this one up and work hard in the seven weeks we have off. I'm happy for my guys; they worked really, really hard for me in the off-season to get me and my Suzuki on top of the box both days."


"Today's race was about what I expected," said Hayden. "Blake and Josh Hayes were riding really well, so it was a tough race for me and my Suzuki. I was third today and I thought it was an all-right position. I was second yesterday; and Blake won from third yesterday, you know, so I figured I'd try it from that way. But I didn't get a very good run on the straight. That's the way this place goes. Yesterday, I got too-good-of-a-run. Today not good enough."


The 2011 Rockstar Makita Suzuki team's next event of the 2011 AMA American Superbike Championship series is at Infineon Raceway in Sonoma, California, on May 13-15th.