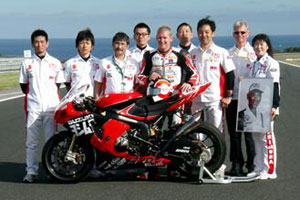 Yoshimura Suzuki is preparing for its second World Superbike Championship race on May 30th at the Miller Motorsports Park fifth round in America.


Following on from its inaugural WSB points-scoring ride with Australian Josh Waters at the Australian series opener at Phillip Island last month, Yoshimura is currently evaluating all data gathered and further-developing the team's GSX-R1000 ahead of the US race, in which 22-year-old Waters will compete in only his second-ever World Championship event.


At Phillip Island, the team tested several new Yoshimura factory parts, including an all-new R-11R racing exhaust, which will be further developed by R&D testing in America and also at the Suzuka 8-Hour in Japan at the end of July.


"Although we were happy with our result, we always want to do better and we have found some areas to work and improve on before we go to Miller Motorsports Park in May."