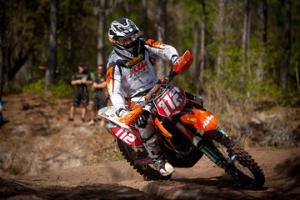 The first event of the Can-Am Grand National Cross Series (GNCC) is in the books, and Charlie Mullins was able to come out on top in what proved to be a competitive and exciting race.

Mullins, who races for the KTM factory team, was able to conquer the Moose Racing Westgate River Ranch off-road course with a last-minute push to edge past Mike Brown, who also races for KTM. Although Brown led for much of the race, Mullins stayed in the picture until the final two laps, and eventually saved up enough energy to speed past Brown in the closing minutes of the race.

"I was pretty much where I wanted to be all day," Mullins told Cycle News. "The last two laps I was behind Brown and I just put on a charge and was able to get the win. On the last lap we came up on a mud hole that was getting pretty deep. He went around it and I went through it and I came out in front. After that, I just stayed on the gas."

It was also a good day for Chris Bach and American Beta, as the rider was making his debut for the little-known manufacturer. Bach was able to surprise many of the famous brands in the competition and ultimately placed third, earning himself a spot on the podium alongside Mullins and Brown.