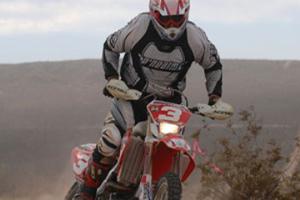 It was deja vu all over again at the third round of the AMA Racing/Kenda National Hare & Hound Championship Series this weekend in El Centro, California, as Kurt Caselli picked up his second win of the season in a repeat performance of the second race.

Not only did Caselli's victory net back-to-back wins for the KTM Off-Road Racing Team rider, but the third round also saw David Pearson as the runner-up for the second race in a row. Yet while Caselli bested Pearson by nearly seven minutes in the previous competition, this race ended up being a lot closer.

"He was on my butt that whole first loop and I was pushing and still trying to ride smart," Caselli told Cycle News. "It was tough. I felt good that second [loop]. The bike was awesome."

Perason ultimately made a few mistakes that allowed Caselli to pull into the lead, but the rider can be comforted knowing that he still tops Caselli in the points standings. Pearson won the first race of the season, and his two second-place finishes give him 80 points on the year, four ahead of Caselli.

In third place was Destry Abbott, who also finished third in the second race and second in the first. Abbott currently trails Pearson and Caselli in the standings.