Seely To Fill In For Injured Grant 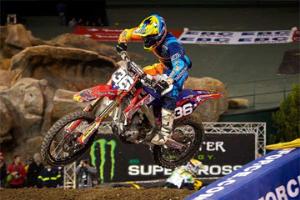 Troy Lee Designs (TLD) has announced that Lites competitor Cole Seely will step up to the Premier class in order to fill in for injured rider Josh Grant.

Seely has been competing in the Lites class for TLD and recently got his first win at Dodger Stadium as part of the West Lites class. However, the rider will not be competing in the East Lites class. Normally, this would mean that Seely would simply be testing or relaxing as the series moved to the East Coast, but Honda manager Eric Kehoe saw him as the perfect person to replace the injured Grant.

That means Seely will be stepping up from his Honda CRF250R to the CRF450R model, then shifting back once the West competition heats up again.

"This is a great opportunity for Cole," said team manager Tyler Keefe. "He's an amazing person who works hard. I think his time on the 450 will elevate his racing knowledge. This is the stuff dreams are made of. Cole deserves this opportunity and the TLD/Lucas Oil/Honda team is behind him 100 percent."

Seely will make his debut at the upcoming Indy Supercross, although he has already tested alongside factory rider Trey Canard in preparation.