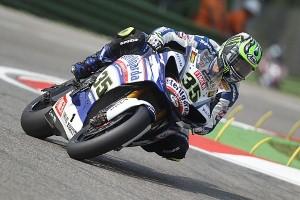 Yamaha has announced that many of its most prominent riders will be displaying sponsorship related to its Yamaha Extended Service (Y.E.S.) program, an optional add-on for bikes and ATVs that essentially functions as an extended warranty.

The announcement took place at the recent Indy Dealer Expo, and MotoGP's Yamaha Monster Tech 3 racer Colin Edwards was on hand to announce the new marketing strategy to the assembled vendors.

"Yamaha U.S. has always had my back for my entire career even during my motocross days as a little kid," said Edwards. "And this new sponsorship from Y.E.S. is a great fit as Y.E.S. will surely have your back once you buy a new Yamaha product!"

Aside from Edwards, the company will also sponsor two superbike racers who ride for the Graves Motorsports team. New rider Chris Clark will be competing on the Yamaha YZF-R1 in the AMA American Superbike series.

Riders who purchase from Yamaha may want to consider the Y.E.S. program if they hope to avoid service charges for their bike.